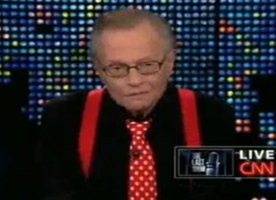 Not many people can get two Presidents of the United States, Ryan Seacrest, Dr. Phil, Barbara Walters, Donald Trump, and Brian Williams, among others, one program, but tonight, Larry King pulled it off for the final Larry King Live of the program’s 25-year run.

Sure, a cynic might argue that King was able to get so many people to pay tribute to him because he never went tough on anyone, but either way, there aren’t many well-known figures in any walk of life who could have inspired as much goodwill as King did tonight. Easy target for mocking though he might be, he’s an icon all the same.

For King’s final speech on his final show, the clearly emotional host said he was “without words.” He said he “never thought [the show] would last this long,” but thanked everyone associated with the show, and of course, the viewers, for making it happen. He reminded those viewers he’s not going away, saying he’ll still have a relationship with CNN, will do radio work, and will “be around baseball.” He closed by saying, “Instead of goodbye, how about ‘so long.'”

It’s clear King has just as hard a time imagining himself out of broadcasting as anyone else….and indeed, can’t stay out of it. It was also clear, though, that tonight was the end of an era, and judging by the litany of well-known faces that showed up, King was far from the only one to notice. Video of his final speech, via CNN, below.