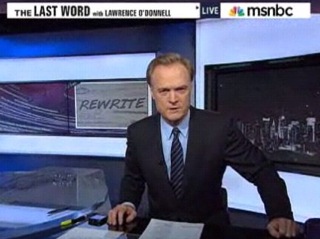 The media firestorm surrounding President Barack Obama‘s Mideast policy speech and Israeli Prime Minister Benjamin Netanyahu‘s address to Congress inspired Lawrence O’Donnell to make his “Rewrite” tonight a crash course on the Israeli/Palestinian conflict, playing select clips of both addresses and concluding both leaders are saying the same thing: the 1967 border are “not tenable.” “But you wouldn’t know that,” O’Donnell complained, “By listening to hysterics who wrongly believe they are rising in Israel’s defense.”

O’Donnell was clearly not happy with the outrage surrounding President Obama’s initial comments, as he found it based on half a sentence. Playing the clip, he dramatically revealed that the words after “1967” were “with mutually agreed swaps.” This, he found, seemed completely congruent with the words in Netanyahu’s speech, where the Prime Minister noted he would agree to “negotiated” borders. These borders, O’Donnell argued, were the very same in President Obama’s speech, simply not named by year, but “you would never know that by listening to hte hysterics who wrongly believe they are rising in Israel’s defense.”

Given this, he accused Netanyahu of “pretending to be enraged” and accused the American press of letting him get away with it in a way his own people don’t even allow. “Israelis are much more critical of their own government than any American dare be,” he noted, highlighting Netanyahu’s 27-member minority in the Knesset as one sign that Israelis weren’t as enthralled with him as the American right is– not to mention a poll showing 57% of Israelis expressing a preference for Netanyahu to have agreed with President Obama outright.

Before specifically analyzing these two speeches and Netanyahu proper, however, O’Donnell gave some background on the Israeli/Palestinian conflict, noting the immense criticism President Bill Clinton received for using the phrase Palestinian state in the 1990s and visiting Gaza City to give a speech before the Palestinian government. “Imagine what the Obama haters would do if President Obama delivered a speech in Gaza, in that same place.” As for the phrase “Palestinian state,” “those who police thought about Israel in this country” didn’t mind it when President George W. Bush used it, because, in the words of Colin Powell, the phrase was “nothing new.” “In a series of winks and nods,” Lawrence noted, “the unthinkable, the unsayable… becomes nothing new.”