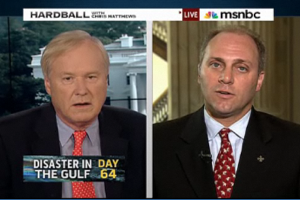 Congressman Steve Scalise, as many in the Louisiana delegation, has been making the media rounds to discuss both the general status of the oil disaster in the Gulf of Mexico and, specifically, Texas Rep. Joe Barton‘s apology to BP (and meta-apology to America). On Hardball tonight, Chris Matthews challenged Scalise to condemn Rep. Barton’s comments which, coincidentally, happen to align with Rush Limbaugh‘s.

It was Day 42 of Matthews’ “Out on a Limbaugh” campaign to get at least one Republican to distance themselves from Rush Limbaugh’s ideas and declare that Limbaugh does not speak for the Republican Party. Matthews asked Scalise directly whether he would rebuke the comments on Limbaugh’s show that Barton’s apology was well-merited. Scalise noted that “unfortunately, I didn’t get a chance to listen to his show; I like his show,” so he couldn’t comment on his show, but that he was concerned about the possibility that part of the $20 billion escrow account BP is setting up for claims will be misappropriated. “My main concern,” he repeated a few times, “is that the money gets in the hands of those people who are affected.”

Matthews quickly lost his patience, asking “what is that attack you’re making here? First of all, will you answer the question– is Rush Limbaugh right here or wrong?” The best he got out of Scalise was that Limbaugh didn’t speak for him because “nobody else speaks for me,” but that, again, he was concerned about misappropriation of funds– “I don’t think anyone wants to see it spent on government bureaucracy.” Matthews responded angrily that “this is just pure, pure partisan politics, what you’re doing here,” and asking cynically, “you think BP is going to make checks out to, what, welfare recipients?”

Video of the heated exchange from tonight’s Hardball below: