Maddow On Romney’s Move Right: ‘How Anti-Gay Do National Republicans Want To Be?’
video

Maddow On Romney’s Move Right: ‘How Anti-Gay Do National Republicans Want To Be?’ 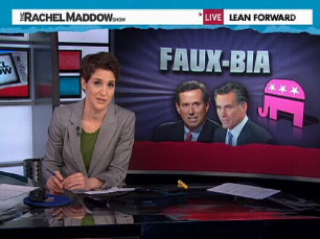 There was a time in Massachusetts politics where Mitt Romney promised voters he would be to the left of Ted Kennedy on gay issues. That was many years ago, however– back when Don’t Ask, Don’t Tell was a new policy– and today, Rachel Maddow reported yesterday, Romney appears to face a strange dilemma. While the national Republican party advocates social conservatism and a repeal of gay marriage laws in the states that have them, Republican voters appear to be far more comfortable on the socially liberal side of the scale than anywhere else.

RELATED: Rachel Maddow Explains Why The Romney ‘Leaving Dog On Top Of Car’ Story Has ‘Legs’

With New Hampshire Republicans redirecting their attention to local politics after this week’s primary, Maddow finds that there is a push to scale back on gay rights within the state, despite the fact that the primary proved that most New Hampshire voters, even Republicans, overwhelmingly reject this course of conduct. In fact, the most staunchly anti-gay marriage candidates– Santorum and Rick Perry— did the worst in New Hampshire, with Mitt Romney, Ron Paul, and Jon Huntsman doing the best of the bunch.

Maddow wondered whether Republican leaders, particularly in places like New Hampshire, “are outstripping their own voters when it comes to being anti-gay.” Specifically, if that was true, it would mean that state leaders with a potential future on the national stage would have to make a compromise as to their beliefs. Maddow used as an example New Jersey Governor Chris Christie, who, on the one hand, “doesn’t want to be seen as a dinosaur” by New Jersey voters, but on the other may hurt his potential future in national politics. If that is the case, Maddow asks, “how anti-gay do national Republicans want to be?”

Maddow then discusses Romney’s past with the Boston Globe‘s Frank Phillips, who confirmed that Romney was challenging Kennedy on the gay rights front and opposed DADT from the start.