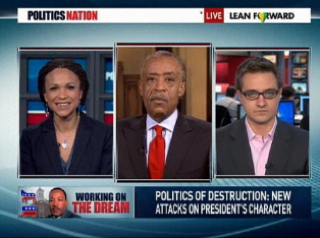 Al Sharpton has spent much of his week working on rallies about race in America, and began his program yesterday talking about race within the Republican Party with two fellow MSNBC hosts, Chris Hayes and Melissa Harris-Perry. The segment has a little bit of everything you’d expect in the quintessential MSNBC panel– talk the use of race on the American right to divide the country, the increasing number of white “militias,” and, most comically, Hayes’ assertion that Rush Limbaugh‘s attacks on President Obama’s black bona fides are, in fact, “impotent.”

RELATED: Limbaugh: ‘The Left Is Suffering From Shell Shock’ Because White House’s Fluke Plan Is Failing

Sharpton had his panel of hosts assess the “ugliness and divisiveness in this country,” and Harris-Perry got the first shot on discussing it, and she had an optimistic take: “I think it’s both a good and bad part of the story is although race is the main strategy being used as the criticism of President Obama, I actually don’t think that racism is the reason that Republicans are criticizing the President.” Sharpton agreed, but only to a certain extent, using as an example of the racial language being used Limbaugh’s comments that the President is “not really authentic” because he “doesn’t have slave blood” (Limbaugh claims those “are not my words”).

“What strikes me is how impotent and feckless the attacks are and how ineffective they’ve been,” Hayes replied. He called the Derrick Bell hug scandal “bizarre” given that the President has a record of achievement in office the Republicans had previously been keen on attacking. “They are trying to change the topic in a pretty impotent fashion,” he added, given that “the record stands on its own.” Sharpton noted that there was a large increase in “white militia groups” in recent years, which seemed like a red flag to him.

Harris-Perry was giggling through most of this, having caught on the joke. “I love, first of all, that Chris Hayes just said ‘impotent’ twice to talk about Rush Limbaugh and the Republican Party.” She concluded that whatever racial language used in this race, she predicted, would be gone around 2016, calling it a “death gasp revival” of racism on the right.