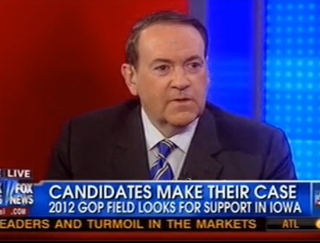 Mike Huckabee hasn’t been one to shirk away from criticizing Herman Cain when proper, but this morning on Fox & Friends, he took the opportunity to defending Cain from a week of white-hot scrutiny after Politico uncovered decades-old sexual harassment accusations. In presidential campaigns, Huckabee lamented, “you spend 80% of the time defending yourself against these extraneous nonsensical things,” and “you almost have to invent someone out of thin air” to avoid the opposition research attacks.

RELATED: Mike Huckabee On The ‘Very Pro-Choice’ Herman Cain: ‘The Damage Has Been Done’

The conversation began with the Iowa caucus, which Huckabee argued required a lot of dedication to win. “It’s the true believers who go to caucuses,” he explained, and in order to be committed to a candidate, people have to have exposure to them. With the frontrunners playing little mind to Iowa, Alisyn Camerota asked Huckabee whether he regretted dropping out of the race. He did not, he explained, because “when you run… you spend 80% of the time defending yourself against these extraneous nonsensical things” instead of debating issues, which is what he considered Cain was going through. “The reality is, chances are someone could find a word I used in a speech 20 years ago” and use it against him– “it’s part of the horrible process.”

To avoid the process, Huckabee explains, “you almost have to invent someone out of thin air, like we did Barack Obama,” who had a thin legislative record and “didn’t really give any speeches.” As a counterpoint, Dave Briggs noted that Obama had also confessed to breaking the law in his book, and by outing his own past, he shielded himself from it. Huckabee agreed, noting, “the first thing a smart candidate does is research yourself.”