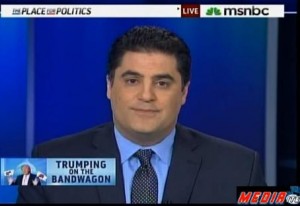 MSNBC Live host Cenk Uygur (can we get his show a name, please?) expended nearly half of Tuesday’s show on the subject of wildcard GOP hopeful Donald Trump, which is somewhat in line with the attention the rest of the media has been giving Trump. But just when you’re ready to throw up your hands and exclaim “Enough,” Trump justifies the coverage by doing something impossible to ignore.

In this case, Uygur spends the first segment of his show talking about the Birther issue with Bill Press and Pat Buchanan (whom Uygur notes used to co-host their own 6pm show on MSNBC), and while they all do a decent job of dismissing the craziness, they neglect to mention that the President can’t release his original birth record, whether he wants to or not.

When the second segment came on, I thought, “Really? Do we really need another 12 minutes on Trump?”

The total saturation of the media by Donald Trump is reaching ludicrous proportions, somewhere along the lines of Sarah Palin+Charlie Sheen to the Ballon Boy power. While this is apparently Trump’s mission, the mainstream media has abetted him heroically, this site included.

On the other hand, how do you not play a clip like this, of the leading Republican candidate for president shifting positions like an illustrated Kama Sutra, and displaying a complete ignorance of the Roe v. Wade Supreme Court decision? (From MSNBC)

On the bright side, he didn’t say “Roe versus Wade? That’s obvious, I’d row. Wading takes much longer! I’m a tremendous rower.”

The conventional wisdom is that this Birther issue is a primary winner/general election loser for the Republicans, but that doesn’t mean that throwing Trump up onscreen every five seconds is harmless. At a certain point, a tipping point is achieved, and the Birther sideshow morphs into the Birther debate. The same average Americans who made Celebrity Apprentice a hit begin to wonder to themselves, “If this stuff is so crazy, why do they keep putting this guy on the TV?”