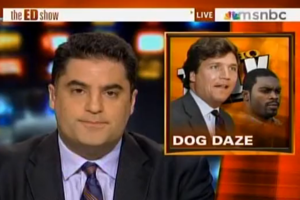 We’re officially in the eye of the least newsy week of the year, and in this desert of eventfulness, one lucky talking head struck gold. Tucker Carlson called for football player Michael Vick to be executed, and people cared. In fact, Carlson seems to have started a trend of promoting execution of those who mistreat animals, as now MSNBC’s Cenk Uygur would like one prominent Alaskan huntress to pay her debts to society for killing caribou.

After showing the clip of Carlson reprimanding Vick on the Ed Show‘s regular “Psycho Talk” segment and giving him a textbook lashing on capital punishment from the christian standpoint– “Would Jesus have called for retribution in blood?”– Uygur called Carlson out for hypocrisy, noting that what Vick did was a horrible thing, but that he paid his dues, and at some point should be allowed a second chance. Then he showed a clip of what he appeared to want to convey to the audience was a similar instance of animal abuse that had not gone similarly punished: Sarah Palin hunting Caribou on her TLC reality show.

“I know there’s a difference, but is it really that large?” Uygur asks, despite the fact that even in introducing the Palin clip he noted that Vick had gotten in trouble for abusing domestic animals which, unless there’s a silent majority of caribou breeders in America, the latter don’t count as, while dogs clearly do. What’s more, Carlson himself has not particularly praised Palin for her hunting or been given much of an opportunity to comment on that otherwise in a way that would make him a hypocrite for defending Palin and not Vick. For all we know, Carlson could very much want Palin executed for killing deer, too. It just hasn’t come up.

The segment from tonight’s Ed Show below: