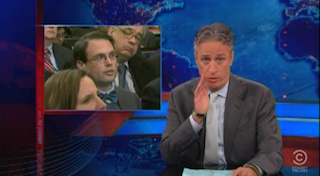 What with the Tea Party jokes, Obama knocks, and footage of John Boehner appearing to do something filthy in an elevator, it would be easy to miss one of the most impressive bits during the early minutes of last night’s Daily Show. Jon Stewart played a clip from early last December in which National Journal’s Marc Ambinder seemed to predict the entire debt ceiling debate that embroiled the nation for the last few weeks. If you haven’t seen it yet, it’s certainly worth a look because it’s pretty darn amazing.

“How do these negotiations affect negotiations or talks to Republicans about raising the debt limit because it would seem that they have significant amount of leverage over the White House now going in?”

At the time, Obama seemed confused what Ambinder meant by “leverage” and, when Ambinder predicted that the Republicans would refuse to raise the limit unless the White House made extensive cuts they weren’t prepared for, the President promised that no Congressman or woman from either side would be foolhardy enough to risk a financial collapse. “Ha ha, it’s funny because it happened,” said Stewart last night, comparing Ambinder to Harry Potter and joking that he must be psychic.

The National Journal has gotten in on the fun, posting the clip today under the headline “Predicting the Future?”

Ambinder, meanwhile, has remained humble, suggesting on Twitter that he’s more like Ron Weasley and denying any psychic abilities.

Still, it’s a great clip and, psychic or not, Ambinder has to feel good.

Watch the moment from Comedy Central below: