O’Reilly Scolds Beck: ‘If I Was Cindy McCain, I’d Slap The Hell Out Of You’ 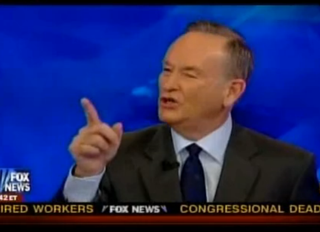 Glenn Beck has gotten nothing but tongue-lashings for his recent theatrical vomiting at the mention of Meghan McCain‘s body, and he ended the week with one final slap on the wrist from colleague Bill O’Reilly. While Beck tried to justify his behavior compared to the controversial comments made by rapper Common, O’Reilly had none of it and commended McCain’s mother, Cindy, for striking back at Beck.

“You’re not going quietly into the night,” O’Reilly quipped upon beginning the segment, though he gave Beck some time with a warm-up topic before talking McCain. While O’Reilly objected to Common’s presence at the White House, he candidly gave the President the benefit of the doubt: “I don’t think Barack Obama knows who the hell Common is.” He compared the invitation to the release of conflicting information regarding the killing of Osama bin Laden, aruging that “there’s no one in charge of this stuff. It’s chaos.”

Beck agreed that the situation in the White House was disorganized, but argued that the Common booking was indicative of a pattern. It is “the circle these people run around with,” Beck argued, tying Common to former communist revolutionary Bill Ayers and 2008 staple Jeremiah Wright. “His actions clearly show that he believes the police are the oppressors,” Beck concluded of the President. He did not manage to convince O’Reilly, who merely reiterated, “I don’t think anybody is in charge in the White House.”

Then he turned to more pressing matters– namely, Beck’s tiff with Meghan McCain. “If I was Cindy McCain, I’d slap the hell out of you,” O’Reilly noted, to which Beck replied by comparing his sins to those of his peers. “We’ve got somebody singing about killing cops and everybody runs to his defense… I make vomit sounds when someone is disrobed–” he was interrupted once more, and finally admitted that it was a “juvenile bit.” O’Reilly intensified his original comment to that reply, inviting McCain into the News Corp building and promising “I’ll let her beat the hell out of you.” He then expressed some near-parental disappointment: “You’re a genuinely nice guy,” he lamented, sad to see his reputation tarnished by these bits. But even this was not enough for Beck, who concluded, “I’ve had enough of Meghan McCain as much as she has had enough of me.”