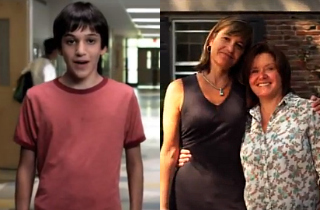 One thing is remarkably consistent in modern life: Christian conservative outrage. Given that much of popular culture has a sense of humor about sacrosanct icons and is often more tolerant about lifestyle choices, there is no shortage of things for the Culture Warriors to perpetually find their inner rage.

Last week, we reported on conservative media watchdog Media Research Center’s Tim Graham whining about — the horror! — ABC personalities praising and celebrating the gay “marriage” (his scare-quotes, not mine) of their friend and colleague Sam Champion. As I wrote in that piece, MRC often provides valuable insight into how journalists who claim the mantle of “objectivity” often let slide their liberal bias in their reporting; but oftentimes the site just complains about things they find icky.

Take, for instance, this harmless Disney Channel commercial for its “Make Your Mark” special featuring a 14-year-old filmmaker named Ben:

Notice anything offensive? Was it the light-hearted tone of the whole thing? The uplifting nature of a kid making a short film to inspire others to stand up to the sorts of bullying that’s plagued him in the past?

Nope. This time, MRC is upset because Ben has two moms. That teeny tiny snippet of information at 12 seconds into the video thrills “the gays,” Graham lamented in a NewsBusters post.

Mind you, the fact that Ben is raised by two lesbian women is completely tangential to the story at hand. The video is about his efforts to create anti-bullying PSAs using his own experiences. The mention of his two moms takes up literally one second of the entire piece. Yet Graham notes that Ben’s two moms “delight” “the gays” because GLAAD and a gay blog noticed the two moms thing and cheered on Disney for its inclusion of such a life story after years of battling over the network’s seeming lack of homosexual characters.

In the mind of the likes of Graham and his boss Brent Bozell (who has his own record with “the gays”), by not hiding the cold hard fact that little Ben was raised by a lesbian couple, Disney Channel is now complicit in “normalizing” “the gays” and indoctrinating school-aged kids into believing that Ben’s “two moms” (Graham’s scare-quotes) is an acceptable thing not worthy of endless scorn and shame.

The Cultural Warrior argument against “normalizing” gay behavior largely centers around the fact that self-identified homosexuals account for such a small percentage of the American population, and yet, as NewsBusters frequently notes, pop culture (run by “the gays”) disproportionately portrays homosexuality in a normal setting, as if it were — ugh! — something tolerable.

By that logic, why don’t the Culture Warriors whine about the other minority lifestyles “glorified” and “normalized” by the liberal gay men running the Disney Channel?

Where’s the outcry about “normalizing” teenage witchdom, as seen in Wizards of Waverly Place? Or how about the “normalization” of single parents with teenage daughters who lead a dual life as a pop star and as a wealthy country girl, as seen in Hannah Montana? That demographic must account for, what, .000000001% of the population? Why does Disney glorify such a lifestyle to malleable teenage minds? CALL THE FCC.

Christian conservatives have every right to lament what is portrayed in popular culture — consumer complaints and preferences are what drive the market for entertainment — but instead of perpetually being outraged by every single instance of homosexuality being “glorified” (i.e., not treated like a defective product, as they see it), here’s an easier solution for the anti-gay warriors: Turn off the channel, block your kids from watching Disney (it’s called modern technology), and live your life the way you choose while letting others do the same. Easy as pie.