Rachel Maddow: ‘Coming Out’ Comments Not Meant Towards Anderson Cooper 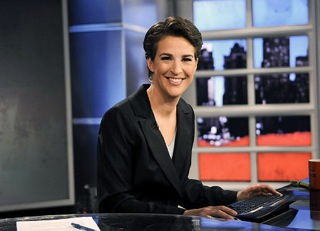 In an interview in today’s Guardian, Rachel Maddow urged others in the cable news business who may be gay to come out, citing it as a “responsibility” to the gay community. The comments were reported by Business Insider as a specific direction to CNN’s Anderson Cooper, with the breathless (and erroneous) headline “Maddow To Cooper: ‘You Have A Responsibility To Come Out’ Of The Closet.” Maddow took to her blog to clarify she meant nothing of the sort: “he literally was never discussed during the interview at all — even implicitly.”

Her short note, entitled “Anchors Away,” both clarifies that she did not mean to allude to Cooper at all, nor did she independently believe Cooper had a responsibility to come out as gay. In fact, she appears rather shocked that some made the connection, noting that “media-about-media today notwithstanding, I did not in my interview with The Guardian say anything about or to Mr. Cooper, nor would I.”

That “media about media”? A post by Business Insider post which specifically claimed by the writer Noah Davis that Maddow’s comments were “clearly targeted” towards the CNN anchor. She refutes the claim, adding that, moreover, if she did have something to say about him, she continued, “you wouldn’t have to read between the lines.”

This, however, she noted as a completely separate issue from the insinuations that she believed Cooper was doing a disservice to the gay community by not coming out if he was indeed gay. The latter, she concludes, never crossed her mind at all– though now that it’s been mentioned, “nor is it what I believe.”