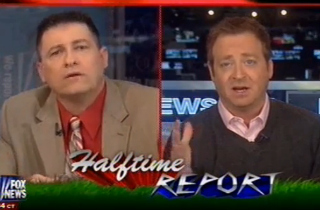 That’s the common rebuttal you’ve likely heard from that conspiracy theorist who cornered you after your freshman-year political science class to just “tell” you about how the plane that hit the Pentagon on 9/11 was actually an American missile and the New World Order just wants everyone to keep quiet about it. We’ve all experienced that person before.

And it looks like Fox’s Red Eye got a dose of something similar earlier this morning.

In the first segment of the show, while discussing bombing suspect Dzhokhar Tsarnaev‘s Miranda rights, sports radio host Dino Costa shocked his co-panelists by taking the discussion into crazy-town with a screed about how there was this one track coach present at the marathon who claims to have overheard a police officer telling the crowd “It’s just a drill” immediately after the explosions occurred.

Costa seemed baffled by the fact that “nobody wants to talk to this guy” about what he saw. Guest-host Tom Shillue jokingly humored the suggestion by feigning ignorance, asking, “Tell me the website? I’ve got to go to these places!” Michael Moynihan piled on by mocking: “It’s called InfoWars dot com.” At another point, Costa lamented that all of the reporting on the bombing has come from “the authorities,” and thus represents potentially untrustworthy information. Watch below:

Later in the show, during Andy Levy‘s “Halftime Report,” the ombudsman confronted Costa, leading to a slightly uncomfortable exchange:

LEVY: You brought up that University of Mobile track coach Alastair Stevenson, who was running the marathon and says he heard the Boston police say, “It’s just a drill.” Do you find it odd that most of the people who were in the vicinity of the blast don’t report any of that? […]

COSTA: Well, what I want to know is: Why was this man allowed to leave Boston the next day? If he saw things that were out of kilter, that were askew, that certainly were red flags…

COSTA: …or at the very least, planted a seed of doubt in someone’s mind, I certainly would’ve thought that the authorities to vet him completely before they let him go back to Mobile, Alabama.

LEVY: Maybe, A) He’s a crackpot; and maybe B) They can always call him in Mobile, Alabama.

COSTA: This is a guy that’s gone to multiple marathon. He’s run marathons all over the world. So if he’s a crackpot, I guess he’s seen things that have been not-so-right at virtually every other marathon.

Ann Coulter jumped in to suggest that even if Stevenson did hear the officer say that, it clearly wasn’t a drill and so the officer would have been mistaken or misheard.

Levy then brought up how the initially confused reporting of disasters tends to lead to crackpot theories: “After Sandy Hook, you had reports that there was a guy in the woods arrested, and that led to all kinds of conspiracy theories.”

Clearly angered by how the panel piled onto him, Costa asked: “So wait a second, we’re just supposed to take, at face value, everything we’re told and not ask questions ever? Ever?! So asking questions or coming up with some theories or exploring it from different angles — this is wrong, how?”

Levy replied that it’s perfectly fine to ask questions, but there are some theories that are just clearly “insane.” This incensed Costa: “So as long as it fits within the parameters of the controlled environment in which the news is coming out, that’s okay. But anything outside of the official description, that’s insane?”

For a pithy response, Levy said: “For example, fire can melt steel,” referring to the oft-repeated conspiracy theory that jet fuel could not have possibly weakened the World Trade Center’s steel beams enough to collapse… without outside interference.

Indeed, it’s always appropriate to ask questions. But they should come from a place of dispassion, where one is weighing the answers without already pre-judging the results at hand. The InfoWars gang and their gullible audience — which apparently includes sports talk-radio host Costa — are clearly giving tremendous weight to one man claiming to have heard “This is a drill” before the bombs went off; and basically no weight at all to the mountains of visual evidence at hand — i.e., the plethora of iPhone, video camera, and surveillance footage. And no weight at all to the fact that one beat cop’s potentially misinterpreted and/or misspoken word is not enough to discredit the preponderance of evidence available not just to “the authorities.”

Watch the “Halftime Report” confrontation below, via Fox News: