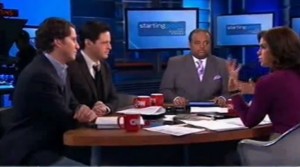 There has been a lot of high-minded chatter among the political media elite deriding the proliferation of presidential debates this election cycle. As CNN prepares to air the 19th Republican Primary debate tonight, Starting Point anchor Soledad O’Brien wondered if this GOP reality show is a good thing. Roland Martin argued that the debates have been revealing, noting “If we didn’t have 19 debates, trust me, Rick Perry would still be in this race.”

O’Brien’s main problem seemed to be that so many debates have squeezed all of the substance out of the race, leaving only a handful of soundbyte moments to show for them. “At some point it feels like the conversation is all about these high drama moments and people can say what — it’s about managing the impact of the moment of the debate…”

“I think what the debates have shown us, we have gotten to see these candidates consistently and in different lights,” Martin said. “Think about it…if we didn’t have 19 debates, trust me, Rick Perry would still be in this race, still be high in the polls. It was all based on what was happening on paper. The debates have exposed people for what they are.”

Conservative CNN analyst Will Cain agreed. “The more sunlight you shine on this process, the better,” he said.

Soledad O’Brien has a point, but it applies to the broader political media, as well. Since the 2008 election, interest in political media has been at gold rush levels, and the need to feed that eternal (yet microscopic) news cycle has led to an emphasis on superficial drama over substance.

The tradeoff is that many more people are engaged in politics, particularly with these hella entertaining debates. That’s a fair trade, if you ask me, because there are still plenty of places for wonks to get a fix, and plenty of opportunities for a smart commentator to slip some nutrition into the media junk food diet.

I agree with Martin and Cain, the debates have provided a valuable public service to voters, acting as a crucible for Perry and Michele Bachmann, whose campaign demise can be traced to her HPV vaccine debate crazy talk. They have also proven problematic for sometime frontrunner Mitt Romney.

More than that, though, the proliferation of debates has served to ameliorate, to some degree, the influence of money on this race. The merits of voters’ judgments are debatable, but strong debate performances by Newt Gingrich and Rick Santorum have helped them succeed far beyond what their respective war chests might indicate (especially Santorum).

Martin also made the point that the media types clucking at the quality of these debates bear much of the blame. “It’s on the people who are sponsoring these debates to ask the real questions,” he said. “You should have questions tonight about foreclosures. You should have questions tonight about real foreign policy. It’s on us. We can’t play the game and say it’s somebody else.”

Roland should be careful what he wishes for, though. If turning down the sizzle means turning off a significant portion of the debate audience, I’m not sure that’s a worthwhile trade. Getting people to turn off Dancing With The Stars and turn on a presidential debate is a win, in my book.