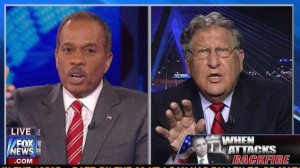 Former New Hampshire governor John Sununu squared off with Juan Williams on Sean Hannity‘s show tonight over the political fallout from a report today showing Mitt Romney was listed as an executive of Bain up to three years after he claimed he retired from the company. Sununu flipped the charges of criminal behavior onto the Obama administration, and when Williams tried to defend the president, Sununu told him his “blind loyalty” to Obama makes him “look foolish.”

Hannity opened by bringing up Sununu’s recent appearance on MSNBC where he laughed out loud at Andrea Mitchell for, as Hannity phrased it, regurgitating Obama talking points on the outsourcing debate. Sununu joked that “her tongue got in front of her eye teeth” so she couldn’t process what she was saying.

The conversation quickly turned to an assertion made by an Obama campaign staffer that Mitt Romney either lied about retiring in 1999 from Bain Capital or lied on legal documentation, implying Romney could have committed a felony. Sununu personally found it amazing the Obama campaign was the one to “bring felony into the discourse” given the president’s ties to “Chicago politics” and felons who he used to be political allies with. Williams bashed Sununu’s assertions as “character assassination,” and insisted the facts of the Romney story were sound.

Sununu told Williams, “Don’t let your blind loyalty for this president make you sound foolish.” He argued that from 1999 to 2002, Romney’s number one priority was preparing for the Winter Olympics and said there is “no reality” in claims that Romney was also keeping his managerial role at Bain Capital. When Williams went after Romney on the issue of offshore accounts, Sununu brushed it aside and claimed over 90 percent of Democrats in Congress have them too, and so they’re hypocrites for bashing Romney for it.

Hannity backed up Sununu’s point by citing several Democrats who have offshore accounts, but Williams rebutted this point by saying “they’re not running for president!” When Sununu continued to criticize Obama’s policies, Williams phrased his critique of the Republican candidate as a potential benefit for his campaign.

“What’s going on with Mitt Romney? He’s allowing President Obama to define him as a guy who’s secretive, who’s not coming forward, who has apparently deceived the Securities and Exchange Commission about when he was running Bain. This is not helping Mitt Romney! His campaign should take control of these issues, governor!”

Sununu pledged to remind Williams about what he said “until his dying days” because of how big a lie he said it was.