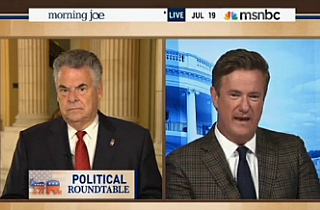 The heated exchange came shortly after Rep. King expressed his contempt for the “isolationist” foreign policy views of Sen. Rand Paul (R-KY), a current frontrunner for candidacy in the 2016 GOP primary field. Scarborough took umbrage at the congressman’s outright dismissal of Sen. Paul’s foreign policy concerns, and so he grilled him on whether a full decade of warfare costing several trillion dollars and thousands of lives has been worth it.

“You do believe, do you not, that the Republican Party’s foreign policy has been too expansive over the past decade,” the host asked King, “We even, dare I say as a country, engage in military adventurism that has not put the United States first.” How long, Scarborough asked, before it’s okay to remove troops from the embattled country?

“How are we different after we pull out of Afghanistan than we were on September 10th? Osama bin Laden is dead. Al Qaeda has been decimated,” the MSNBC host shot back. King responded that al Qaeda is “right across the border” in Pakistan, prompting Scarborough to assert that the terror network is anything but centralized.

King then accused the host of engaging in “the type of exaggerated debate that does not help us,” which ultimately led to the two taking a heated tone with one another. “We’ve been in Afghanistan since 2001, there are people dying in Afghanistan this week that were 5, 6, 7 years old when the war started, Peter,” Scarborough said, his voice rising. “It is not our job to be the world’s policeman and to be there for the next 20 years!”

“It is our job to protect the United States,” King pushed back. “If we arbitrarily withdraw from Afghanistan, we leave ourselves open for another attack.”

Watch the full exchange below, via MSNBC: