Sen. Rubio On Immigrating Illegally To America: ‘Who Wouldn’t Do Anything To Feed Our Children?’
video

Sen. Rubio On Immigrating Illegally To America: ‘Who Wouldn’t Do Anything To Feed Our Children?’ 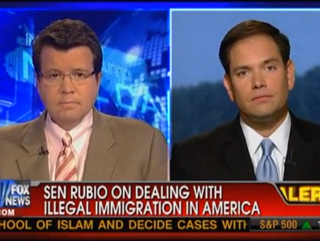 Sen. Marco Rubio appeared on Your World with Neil Cavuto today to discuss his book and the impact President Obama’s new immigration measure will have on his work in Congress to solve the problem– a measure he argued would have a negative effect on the country. Sen. Rubio also addressed a comment in his book about immigration that Cavuto thought may hurt him with “die-hard conservatives”: the assertion that he would, if his children needed it, immigrate to America legally.

“I got elected to be a serious policymaker, not some guy that does press releases in election years,” Sen. Rubio argued in response to the possibility that the President’s initiative hurt him politically. “When [the President] pulls an election stunt like this, it’s going to have some serious consequences,” Sen. Rubio argued, predicting this will make true long-term reform more difficult.

Cavuto then turned to the sentence in his book where he claims he would, without a doubt, move to America illegally if his children were hungry. Adding that caveat that it was not remotely a political or legal statement, Sen. Rubio noted that he didn’t imagine many people would disagree. “Who among us who are parents and have children, if our kids are suffering and we couldn’t provide them a better life where we lived… wouldn’t do anything to feed our children?” Cavuto noted that he saw the point, but still believed that it might hurt him. “The reaction from the die-hard conservatives in your party might be ‘no way in hell do we entertain the thought,'” Cavuto replied.

Sen. Rubio’s response was one of law: “we can’t be the only country that doesn’t enforce its immigration laws,” he argued, adding that there was not sufficient emphasis on the fact that “this is the most generous country in the world for immigration” and the problem must be solved, even though anyone with children would do all they could to help them.