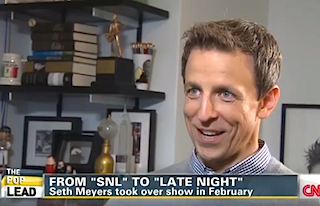 Last night, CNN’s Jake Tapper was a guest on Late Night with Seth Meyers, where he talked chastised members of Congress for deleting their “prayers” for Bowe Bergdahl. Today, the anchor returned the favor, interviewing Seth Meyers on The Lead.

Seated backstage at 30 Rockefeller Plaza, Meyers told Tapper about his transition from head writer and Weekend Update host at Saturday Night Live to hosting his own late night talk show. He said he’s had to learn how to tell jokes standing up and mostly tries to avoid “feigning interest” in what his guests have say.

“I didn’t know it was a better gig until I started doing it,” Meyers said of Late Night. While SNL is a “young man’s game,” he said his new gig is a “way better job for a married person.”

As for the “late night wars,” Meyers has mostly stayed out of the fray. Naturally, he takes his advice from producer Lorne Michaels who told him “the real competition at that hour is to just try to do something that makes people stay awake for a few more minutes.”

So far, Meyers is succeeding on the ratings front. With a strong lead in from Jimmy Fallon’s Tonight Show, Meyers is consistently beating CBS’ Craig Ferguson head-to-head and even besting David Letterman and Jimmy Kimmel in the 18-49 demo on many nights.

It won’t be until Ferguson departs at the end of the year and a yet-to-be-named host replaces him that Meyers is likely to face any real ratings threats.