Stephanopoulos Was Also Member of Clinton Global Initiative, Along with These 13 Big Media Names

Stephanopoulos Was Also Member of Clinton Global Initiative, Along with These 13 Big Media Names

While ABC’s This Week moderator George Stephanopoulos is in hot water for failing to disclose his donations to the Clinton Foundation while reporting on the philanthropic organization, it turns out he was also once a member of the Clinton Global Initiative (CGI), a leadership arm of the foundation. And many other media stars were as well.

According to CGI, membership comes with a $20,000 donation (some complimentary memberships are also available each year). As conservative blogger Jeryl Bier pointed out, CGI’s website lists some big media names under notable past membership, including Stephanopoulos himself: 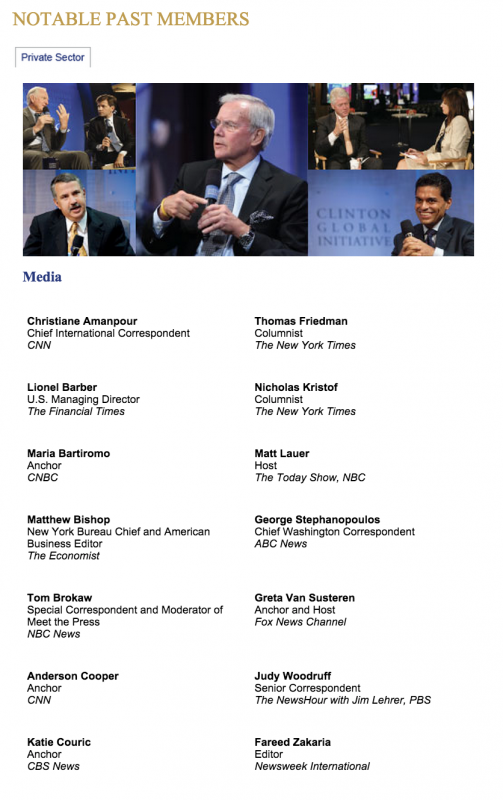 It’s unclear whether any or all of these CGI members paid the $20,000 fee. We reached out to the organization for comment on when these media stars were members and if they received complimentary membership or not, but have not heard back.

As CGI’s website notes, membership benefits include an invitation to its annual meeting and an array of networking opportunities. Bier noted that, at one point, members had access to an invite-only website with “‘a member directory, a messaging system, and commitment information,’ but it’s not clear if that website still exists.”

UPDATE — 5:04 p.m. ET: A Clinton Foundation official tells Mediaite that journalists who moderate panels and participate in CGI events are not asked to pay a membership fee.

“In fact, in 2012, we reclassified members of the media who participate as “guests” rather than “members” to acknowledge this distinction,” the official added.

UPDATE — 10/14/15 1:04 p.m. ET: Fox Business reached out to Mediaite to confirm that Maria Bartiromo has never been a member of the Clinton Global Initiative.