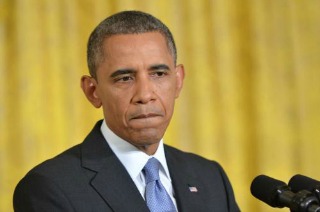 President Barack Obama’s supporters, and the president himself, often cite “obstructionist Republicans” as the excuse for this or the other failure. This president’s unique inability to cajole or coerce his opponents to support compromises which slightly favor his position has always been his shortcoming alone, but disproving the notion that Republicans irrationally oppose and frustrate Obama’s every initiative is difficult. Falsifying a faith-based assertion often is.

But this administration’s haplessness, its half-heartedness, and its ever-evolving case for intervention in the ongoing horror in Syria has exposed as partisan and baseless the accusation that Obama’s inability to govern is the result of the dedication of his opponents. Many Republicans support Obama’s position on Syria. It is the White House’s vacillation and lack of conviction that is preventing them from striking and executing a coherent policy on the crisis in Syria.

RELATED: Conflict of Interest: Syria to Show Why War in 2013 No Longer Must-See TV

CNN made the admirable decision on Thursday to broadcast the debate in the British Parliament over whether to intervene in Syria. Breaking away from that debate briefly to examine the American debate over intervention, CNN’s Dana Bash revealed the thinking of Republicans in Washington on whether or not to support intervention:

“This is one area where Republicans don’t want to embarrass the president,” Bash said of GOP leaders in the Congress. She noted that the House leadership is not calling Congress back from recess early because of the uncertainty surrounding whether a majority of House members would support Syrian intervention.

But Bash went on to say that this uncertainty is the result of the White House’s failure to make the case for an attack. “Until and unless the president makes a case, whether it’s limited or not, it’s going to be very difficult for congress to hold a vote on something that actually could pass,” Bash added.

This is probably true. The legislators which NBC News’ Chuck Todd artlessly but somewhat accurately called the “isolationists” on the ascendance in both Democratic and Republican Parties can be counted on to oppose intervention in Syria. Their argument will not be easily dismissed. While some would concede that reinforcing the international norm prohibiting the use of chemical weapons is valuable, and providing a disincentive toward their future use by punishing the Syrian President Bashar al-Assad‘s government may be of some benefit, many lawmakers genuinely do not see the American interest spending treasure and possibly blood in enforcing that proscription.

Surely, a Democrat-controlled Senate with the support of vocal Republican hawks like Sens. John McCain (R-AZ) and Lindsey Graham (R-SC) would support a resolution authorizing intervention in Syria. But would the House pass such a resolution? The conventional wisdom is that it would not, and the politics of the debate currently favor those representatives who oppose intervention.

However, when another unpopular national-security related issue was put to the House, one in which the politics favored opposing the president’s position, the supposedly recalcitrant “isolationists” were defeated.

In July, the House voted against limiting the National Security Agency’s power to collect intelligence on American citizens. The Amash-Conyers Amendment failed by the narrowest margin, 205 – 217, with 94 Republicans and 111 Democrats voting for the amendment to limit the NSA’s powers.

A majority of House Democrats and Republicans were moved to support Obama’s position, even though it was clearly politically dangerous. The 113th Congress is not the 112th Congress — a fact the White House and its supporters gloss over when it is politically convenient for them.

The Obama administration could convince trepidatious House members to pass a resolution authorizing a limited intervention in Syria. Surely, some Republicans would want a more robust plan which pursues the goal of removing Assad from power. Some Democrats would seek to ensure that positively no ground troops are used to ensure successful strikes or secure chemical weapons sites. These objections aside, a compromise resolution favoring the White House’s position could be reached.

But the president’s administration has done nothing but vacillate since they began to signal to the press that intervention was likely. First, the White House wanted a narrow mission which would accomplish the goal of eliminating the Syrian government’s capacity to use chemical weapons. This goal soon became less important than the objective of a punitive strike of some kind to chasten the Assad regime. Some in the administration suggested that such an operation would be accomplished over a period of just 24-hours.

As America’s once-willing allies in France and Britain have begun to express reservations about the mission in Syria, and the United Nations performs its predictable function of facilitating genocide, the Administration again waived. On Wednesday night, Obama tells PBS that he has “not made a decision” on whether to pursue a strike on Syria.

The administration has projected the impression that they are just as unclear about their legal right to attack Syria as they are about their political ability to execute such a mission. First the administration believed that the 2001 authorization of force after September 11 justified the intervention in Syria. Then, the War Powers Act and the language regarding an “imminent threat” to the United States allowed Obama to act unilaterally in Syria, the White House’s thinking went. Now the administration is consulting Congress and making overtures towards a debate, if not a resolution.

Bash is correct. Republicans in Congress are not the problem here. The Obama administration’s self-evident inability to pick a rationalization for war and stick to it is. The ineptitude of this White House as it prepares to make a case for war – a burden it did not have to shoulder prior to the intervention in Libya – is making the 22-month debate over invading Iraq look downright adept.