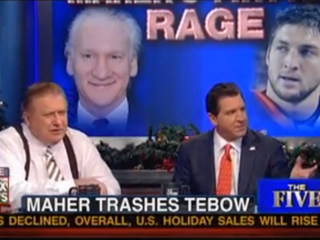 Yesterday on The Five, Eric Bolling ran out of time for a segment on the single thing that angered him most over the weekend: Bill Maher‘s “joke” about footballer Tim Tebow being forsaken by Jesus over the weekend (it was a little more explicit than that). Bolling reacted to the disgusting display predictably, and was joined by the crew– including a particularly vocal Bob Beckel— in tearing Maher apart.

Bolling had already fairly strongly expressed his disgust with Maher for his Tebow tweet over the weekend, and so reiterated his point (summed up entirely in the hashtag #straighttohellBill) and tossed the story to Beckel. Despite being the only liberal on the panel, Beckel was in no mood to defend Maher, having previously been fairly clear that he found the entire media frenzy Tebow is somehow involved in distasteful. “I think it’s great you did it,” Beckel told Bolling, arguging that Maher’s tweet was particularly heinous given that Christmas was “a celebration of our Lord and Savior… I’ve used that word [the one in Maher’s tweet] plenty of times, but not like this.”

He then took the opportunity to disown Maher for the entire political left wing. “You all say Maher is a liberal– Bill, you ain’t a liberal, we just sent you out of the barn,” concluding with a flourish, “I’m tired of defending this son of a bitch.”

Greg Gutfeld then weighed in on a different note, to offer an explanation for Maher’s hateful rhetoric. “Bill Maher hates Tebow because Tebow looks like Tebow, and Maher looks like a talking thumb with the face of an aardvark.” Kimberly Guilfoyle agreed that Tebow was “pretty beautiful.”

The Five is one of the few places in which Maher’s Twitter comments have been given this much press, likely because it appears all of the hosts have strong opinions about both Tim Tebow and Bill Maher. It is easy to look at this case and dismiss it because Maher has made a career out of putting offense over humor, of making it obvious that his priority is to say unpleasant things for the sake of seeing people revolted, instead of saying funny things to see people laugh.

He has said exactly two brilliant things in his entire career, and they are worth noting: that Newt Gingrich is “an idiot who has always been wrong about everything,” and that the American/Western conception of fundamental human rights is superior to any iteration of those rights in the past and in other political contexts. So yes, lightning can strike twice but, overwhelmingly, it is easy to ignore Maher’s insults thinly-veiled as jokes. The reason this case is particularly different– and why The Five‘s treatment of it is particularly respectable– is that it concerns a holiday sacred to many, and a cultural figure who has become the focus of a phenomenon way beyond his control. Maher’s tweet is an easy place to draw the line and say “this Tebow thing has gone too far.”

Tebow, as a person, is obviously highly religious, but he doesn’t appear to be doing any of the sanctimonious preaching that his detractors accuse him of. Go to YouTube and take a look at some of his interviews– even for someone removed from football, a few minutes listening to him speak make it fairly clear that the obnoxious monstrosity that is “Tebowing,” the phenomenon, has little to do with Tebow himself. To insult both him and the world’s largest religion on its second largest feast for a cheap laugh is what feeding the phenomenon without taking a look at the man at the center of it lends itself to. Turning Christianity into a marketing ploy– which is not the fault of Tim Tebow himself– is to disrespect the religion, and opens the door for characters like Maher to disrespect it without pushback. And if he can get away with it, we as a society are worse off for it. This is as good a signal as any that it’s time to give the Tebow/Christianity frenzy a good rest, and for the football world to take a look at Tebow outside of his prayer preferences.