The State of Cable News: All About Me
video

The State of Cable News: All About Me 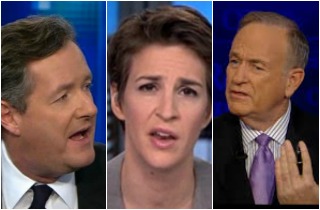 President Barack Obama set to deliver his fifth State of the Union address on Tuesday night where he is expected to address a variety of topics which do resonate, on some level, with the American people. The endless economic recession and its accompanying anxiety and pessimism have prompted him and his vulnerable allies in Congress to fret about a fixed feature of any economy: the disparity between rich and poor. Republicans, for their part, are also focused on pocketbook economic issues, though their prescriptions for how to remedy Americans’ increasing economic dissatisfaction varies greatly from those of the president.

Agree or disagree with these positions, at least they align with the priorities of average American voters. When asked by pollsters what they believe is the most pressing issue facing the nation and should be the highest priority for lawmakers, Americans have for months said the same three things: the economy and job growth, the federal budget, and health care.

The average prime time cable news viewer is even less well-served by the Acela Corridor media complex than they are by Washington D.C. For cable’s top pundits and personalities, Americans’ priorities take a back seat to their own myopic focus in the issues which pique their own interest.

For CNN’s flagship host, Piers Morgan, the preeminent issue is and always will be gun violence in America and gun control legislation. But a topic that might have once resonated with Morgan for altruistic reasons has long since evolved into an opportunity to talk about himself.

On Monday, the CNN host invited an Oklahoma state senator on his program to talk about a bill he filed called the “Piers Morgan Constitutional Right to Keep and Bear Arms Without Infringement Act.” Morgan’s producer defended the segment by saying that the filing of this law is news and is, thus, relevant. It just so happens that the bill is the result of Morgan’s endless crusade and serves to elevate his own public profile. Mighty convenient.

This self-centered phenomenon extends to Fox News Channel, too, where host Bill O’Reilly is consumed with the cultural threat posed by the “wets” of his generation: those who support the legalization of marijuana consumption. The last prohibitionist laments the increasing unpopularity of his position on a regular basis, poses as an advocate for “the children,” and rails against his increasingly apparent minority status.

Rather than adapt to the changing conditions, the culture warrior is consumed with the features of a modern society that is leaving him behind. On Monday’s program, the threat to all that is decent arises from cellular technology, online forums, and the cruelty that accompanies anonymous discourse.

Even MSNBC host Rachel Maddow, who is at least pursuing a semi-relevant news story, has settled into her own myopia. On Monday, Maddow spent the first 30 minutes of her program digging into the details of the New Jersey Legislature’s investigation into the charges surrounding “bridge-gate.”

For 30 minutes, arcane detail and conspiratorial dot-connecting dominated the flagship MSNBC program. 19 days after this scandal broke, there is little in the way of news to report. Self-satisfied speculation and conjecture suffice for info-tainment.

All of these segments, a cross section of just one night of cable news, can be tied together by a common theme: the host’s partialities, not the audience’s, dictate the focus of coverage. This is not a new phenomenon and cable news is, after all, show business. But it must be bluntly stated; most Americans simply do not care about these hosts’ personal gripes. As such, there is a large audience that has been abandoned and which no prime time cable host is even attempting to serve.

The state of cable news is troubled and dominated by cults of personality. Meanwhile, the available universe of cable news viewers continues to shrink as television consumers seek out the content tailored to them rather than O’Reilly, Maddow, and Morgan.