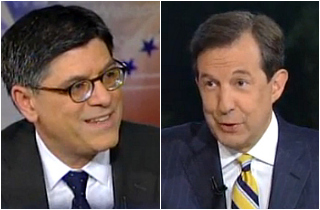 On Fox News Sunday, host Chris Wallace and Treasury Secretary Jack Lew led a contentious symposium on the history of the debt limit, with each accusing the other side of bucking responsible historical trends in refusing to negotiate.

Wallace began by casting doubt upon the administration’s claim that default would be “catastrophic.” “On the other hand the Fed continues to pump money into the economy,” Wallace said. “Given that, what’s the likelihood that a default would be catastrophic?”

“I know the direction is bad,” Lew replied. “There is a range of how bad. It is irresponsible and it is reckless to take that chance.”

“Frankly, I think your history is wrong,” Lew said. “If you look at the cases where the debt limit was involved, there were many other things attached to the debt limit, but the question of threatening to cause a default of the United States, not until 2011 did it become a positive agenda—”

“With all due respect, your history is wrong,” Wallace responded. “This has happened over and over again, and presidents have negotiated…In 1997 you were deputy director the OMB when the debt limit was tied to measures to balance the budget. If it was good enough for Bill Clinton to sit down with the House Speaker, why is not good enough for Barack Obama?”

“The president wants to negotiate,” Lew said. “The president has taken many steps over the last several years to show his willingness to negotiate. He’s done it with Democrats saying he’s too eager to negotiate! Republicans have not come forward and made comparable movement. If we were in a place a year ago or two years ago, when everything was on the table, where entitlement reform and tax reform were equally on the table, we wouldn’t be where we are now.”

“I take away from this conversation that even though Republicans are willing to talk about a debt deal, it’s the president who’s digging his feet in the ground,” Wallace finished. “It sounds like you want unconditional surrender and nothing else!”