GOP Sen. Ernst Relentlessly Grilled by Voter on Trump-Ukraine: ‘Your Silence Is Supporting Him’ 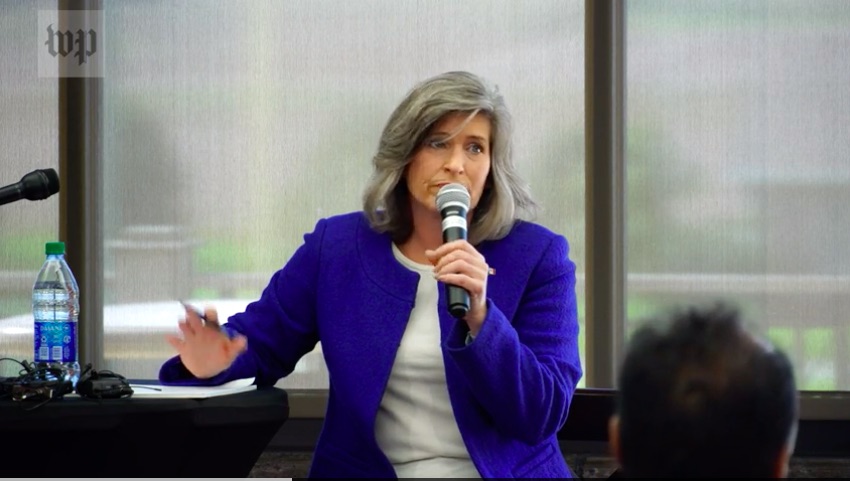 A frustrated woman relentlessly grilled her Senator, Joni Ernst, over President Donald Trump’s Ukraine-whistleblower scandal at an Iowa town hall, repeatedly pushing the Republican to take a stand against his conduct: “You still stand there, silent, and your silence is supporting him.”

Video of the contentious exchange was captured by the Washington Post, and shows the woman, Amy Haskins, of Manning, Iowa, stubbornly bird-dogging Ernst’s evasive replies and asking “Where is the line?” that would prompt the Senator to publicly condemn the president for enlisting foreign governments to investigate his potential 2020 rival, Joe Biden.

“How is that helping anybody?” Haskins pressed Ernst at the outset, in reference to Trump’s latest call for China to investigate Biden, prompting applause among the audience. “Where is the line? When are you guys going to say, ‘Enough’ and say ‘You know what, I’m not backing any of this’?”

“You still stand there, silent, and your silence is supporting him,” Haskins added to more applause.

“I can say, yay, nay, whatever, the president is going to say whatever the president is going to do,” Ernst offered. “It’s up to us as members of Congress to continue working with our allies making sure we remain strong in the face of adversity and that’s what we have to do is to encourage those other contours and so that’s what we will continue to do.”

“I beg your pardon, but ‘all of our allies’ he’s pushing aside, he’s making fun of them on Twitter,” Haskins countered. “I understand that’s a non-answer answer, I understand ,I get it, I know what you’re saying.”

“I know you can’t speak for him, but you can speak for yourself,” Haskins shot back.

“I already said that too, whistleblowers should be protected,” Ernst said.

“And our president shouldn’t be threatening them and he also should not be encouraging other countries to investigate his political rivals?” Haskins pressed.

“I would say to that, corruption no matter where it is should be ferreted out,” Ernst responded, both not answering the question and repeating a popular distractive talking point among Trump defenders.