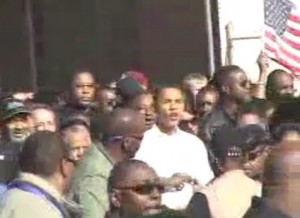 Conservative activist Andrew Breitbart is at it again, continuing a years-long effort to falsely tie President Obama to the New Black Panther Party, favorite big black bogeyman of the conservative media. The big story this time is that New Black Panther leader Malik Zulu Shabazz photobombed then-Sen. Barack Obama at a commemorative march in Selma, Alabama, in 2007, and that the two “shar(ed) the same podium” at the event. Let’s count the lies and distortions together. (For the uninitiated, the Urban Dictionary defines “photobomb” as (verb)- to drop in a photo unexpectedly…to hop in a picture right before it is taken.)

For those who live in the real world, here’s a quick recap of the right’s long history of trying to scare white people by implying some sort of relationship between the New Black Panther Party and Barack Obama. During the 2008 campaign, reports surfaced that the Obama campaign had posted an endorsement of the candidate, by the NBPP, on its website. But what really happened was that an NBPP member posted a blog in a user-controlled forum (kinda like our comments section), and it was later removed.

In the waning hours of that campaign, the McCain campaign also pushed a story about two NBPP members outside a Philadelphia polling place, who were chased away by police because one of them was holding a nightstick. The group’s leader, Malik Zulu Shabazz, told me the following day that those two members defied his explicit instructions in bringing a weapon to a polling place. He was authentically angry about it, but mainly because of the heat it would bring down on his organization.

That story would become the basis for an overreaching suit by the Bush Justice Department that resulted in default judgments against the two members, and the organization. The Obama DOJ vacated the judgments, citing a lack of legal justification, and obtained an injunction against the man who had carried the nightstick. A politically-stacked Civil Rights Commission took up the case in order to, as one Republican member of the Commission said, “bring Eric Holder down and really damage the President.”

The whole thing got tick-tock coverage on a number of Fox News programs, and across the conservative web, but very little from the mainstream press, except to debunk it.

Just in time for the 2012 election, however, comes more of this silliness, from Andrew Breitbart himself, and his progressive pal, Lee Stranahan.

The lies and distortions in Breitbart’s post, in all fairness, come from former DOJ official J. Christian Adams‘ new book, and not just from Breitbart’s imagination. Distortion nos. 1 and 2 are right in the headline, as Breitbart claims Shock Photos: Candidate Obama Appeared And Marched With New Black Panthers In 2007:

New photographs obtained exclusively by BigGovernment.com reveal that Barack Obama appeared and marched with members of the New Black Panther Party as he campaigned for president in Selma, Alabama in March 2007.

The photographs, captured from a Flickr photo-sharing account before it was scrubbed, are the latest evidence of the mainstream media’s failure to examine Obama’s extremist ties and radical roots.

The clear implication is a relationship of some sort between Obama and Shabazz, and the implication of that headline, as anyone who knows English can tell you, is that the future president was being hosted by Shabazz and his group, or were somehow in partnership for the event.

What the photos actually show is Malik Zulu Shabazz standing at a podium, and then-Sen. Barack Obama standing at the same podium, at a different time. If this constitutes “sharing the same podium,” as Breitbart asserts, then I have “shared” podiums with Barack Obama for three years now. And no, I’ve never addressed an audience before or after an Obama speech, but there is no proof that Shabazz did either in this instance.

There’s also a grainy screencap of a Youtube video in which Shabazz is visible behind Obama and then-Sen. Hillary Clinton during the march, which commemorated the 42nd anniversary of “Bloody Sunday.” In effect, it was a “photobomb.”

He also claims that Shabazz says he “spoke” to Obama at the event, but provides no evidence of this. I located an interview in which Shabazz claims he “met” Obama there, which makes him one of probably thousands who could make the same claim. In any case, Breitbart’s use of Shabazz as a news source is curious, at best.

Breitbart goes on to outright lie about the NBPP and Obama, saying, “Obama’s own campaign website would post an endorsement by the New Black Panther Party in March 2008,” which I covered earlier in this story. At the time, I spoke to a campaign source, who explained that even Fox News had decided to remove the story from their website:

An Obama campaign spokesman explained that the page in question was actually a user-created profile on an innovative campaign forum called “MyBarackObama.com,” modeled after internet communities like myspace and Facebook, and that anyone could sign up for one. He mentioned that Fox News had reported the story, but then took it off of their website. He assured me that the New Black Panther Party had never appeared anywhere else on the campaign’s website, and that they had taken the group’s blog down once they were made aware of it.

I checked, and sure enough, Google returned a link to a Fox News story about the “Official Webpage Endorsement,” the only “legitimate” news outlet that came up. And sure enough, when you click the link, oops! Not there! No retraction, either, mind you.

The distortions continue, as Breitbart implies that the White House is hiding something about its visitor logs:

I have been calling for the White House to disclose which Malik Shabazz visited the private White House residence on July 25, 2009, two months after the DOJ voter intimidation case was dismissed.  So far, the White House has refused to do so, leaving open the question of which “Malik Shabazz” appears in visitor logs released to the public.

It’s actually not such an “open question,” as the White House has already definitively stated that it was not the NBPP’s Malik Zulu Shabazz who visited the White House:

In September, requests were submitted for the names of some famous or controversial figures (for example Michael Jordan, William Ayers, Michael Moore, Jeremiah Wright, Robert Kelly (“R. Kelly”), and Malik Shabazz).  The well-known individuals with those names never actually came to the White House.  Nevertheless, we were asked for those names and so we have included records for those individuals who were here and share the same names.

It’s not reasonable for anyone to expect the White House to violate the privacy of someone who’s not a public figure, and Breitbart’s premise is characteristically illogical: if the White House is lying when they say it was a different Malik Shabazz, why would Breitbart believe them even if they did answer him? That’s how conspiracy theories work: they are logic-proof.

Most offensive, though, is Breitbart’s comparison of the NBPP to the Ku Klux Klan (which is the real point of this crusade, by the way; to achieve racial absolution for the white man by balancing those scales), and even more so (because he ought to know better) Lee Stranahan’s:

If there was a 4th of July event and the Ku Klux Klan were given a speaker’s slot, would any GOP candidate be stupid enough to speak there?

Stranahan also makes the claim that the Obama DOJ “doesn’t want you to know” about the NBPP’s history of inflammatory rhetoric, but offers no evidence of this. That’s because there isn’t any.

More importantly, though, Breitbart and the zealots behind this smear are trying to create a Black Menace to scare white voters, and tie it to Barack Obama. Now, no one is saying that the NBPP are good people. The NBPP has been designated a “hate group” by the Southern Poverty Law Center and the Anti-Defamation League. They’re very bad people, but their worst offenses are making a lot of vile statements (many of them right to my face), and getting into a shoving match with some reporters. To equate them with a murderous group like the Ku Klux Klan is offensive; to do so in an attempt to race-bait is despicable.

Their membership numbers are unknown, but I would be shocked if it exceeded the low hundreds. Shabazz was consistently evasive with me about the group’s funding, but did reveal that they are not well-funded. At various times, I’ve tried to contact the NBPP headquarters, and gotten disconnect messages. They are not a menace to anyone. Their primary use is to scare white people, which is apparently pretty easy to do, depending on the white person.

If you doubt the race-baiting nature of Breitbart’s campaign, if the lies and the straining at logic aren’t convincing enough, take a look at how Breitbart’s bloggers use “New Black Panthers” and “Black Panthers” interchangeably. As Stranahan points out, leaders of the original Panthers have denounced the NBPP, even suing them for use of the name, and stating that the New Black Panthers operate on “hatred of white people.”

These Breitbart bloggers obviously know the difference, since they’re tagging these posts accurately, but the point isn’t the ideology of this specific group; it’s the “BLACK,” stupid!