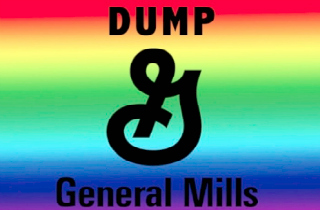 In June, the National Organization for Marriage (NOM) began an initiative to boycott General Mills over the food company’s open opposition to the Minnesota amendment to ban gay marriage, which is scheduled for a vote this November. As readers may recall, some protestors have gone as far as accidentally setting fire to the lawn of the company’s headquarters.

In a Monday blog post, NOM’s Jonathan Baker explained that the fight against the “kid tested, mother approved” company is far from over, especially now that General Mills has teamed up with AOL and Everyday Health for a new website called “Live Better America,” which will offer families recipes, nutrition and healthy eating tips, and… GAY MARRIAGE.

That’s right. NOM believes that because General Mills said they’d eventually like the website to explore “mind and body issues and relationships,” that means the website is secretly a cover for advancing the gay agenda to redefine marriage. So says Baker:

Look for these lifestyle, mind and body, and relationship articles to start off in a very benign manner (who thinks we don’t need a little more exercise?), but expect before long a transition into a renewed effort pushing for the redefinition of marriage and family in subtle and not so subtle ways.

Not sure how “mind and body and relationship issues” automatically means “GAY PEOPLE” — unless, of course, you’re an extremely repressed type who never looks inward and thus assumes only the homosexuals do that kind of wussy stuff. But even if the website does ultimately end up with a few LGBT articles, so what? Just don’t visit it. And don’t let your children visit it, lest they learn that gay people face “mind and body and relationship issues.”

And as a side note to anti-gay marriage advocates: The issue of “defining” or “redefining” marriage exists solely because the government is involved. As a fundamentally religious institution, marriage should be left to individual churches and temples to decide upon. You should advocate for government to get out of marriage entirely, not control it even further. Let’s not forget: government’s major involvement in the marriage business began as means to prevent miscegenation, not to “protect” marriage.