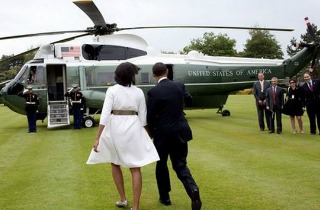 On Monday, the Associated Press’ Charles Babington published a rather grim assessment of the state of the Republican Party roughly one year after the GOP’s poor showing in the 2012 elections. Babington accurately observes that congressional Republicans are both faltering and factional. He correctly notices that many Republicans are actively forgetting the lessons that 2012 taught them about the minority vote and how conservative social policy positions are unpalatable to the broader presidential electorate. But Babington’s analysis might leave partisan Democrats with the imprudent belief that their party’s political prospects are as bright as the rising sun. In fact, Democrats have their own political troubles brewing. Some in fact, are far more intractable than those with which Republicans are currently wrestling.

“A year after losing a presidential race many Republicans thought was winnable, the party arguably is in worse shape than before,” Babington opens. This observation is undeniably accurate.

“It’s almost quaint to recall that soon after Mitt Romney lost to President Barack Obama, the Republican National Committee recommended only one policy change: endorsing an immigration overhaul, in hopes of attracting Hispanic voters,” he continues. “That immigration bill is now struggling for life and attention in the Republican-run House.

The bigger worry for many party leaders is the growing rift between business-oriented Republicans and the GOP’s more ideological wing. Each accuses the other of bungling the debt ceiling and government shutdown dramas, widely seen as a major Republican embarrassment.

All true. He continues, noting that Republicans are set to lose a gubernatorial race in Virginia. Republicans would be well-advised to not dismiss seemingly inevitable electoral loss as an aberration isolated to the Old Dominion which cannot possibly inform political observers about the GOP’s political future. In a state with an electorate that increasingly mirrors the nation, where Republicans have historically won the governorship in off-years in which the White House is occupied by a Democrat, Virginia Attorney General Ken Cuccinelli’s pending loss is just the kind of dead canary that should scare Republicans (particularly those of the tea party brand).

Further still, a conservative faction within the Republican Party continues to attempt to force the party further to the right by mounting primary challenges against successful GOP officeholders. Successful primary challenges against entrenched Republican lawmakers are as likely to result in unlikely Democratic victories as they are the ascension of more conservative politicians to national office.

For some conservative political observers, the Republican Party’s internecine skirmishes are indicative of a form of vitality that Democrats do not enjoy. Indeed, there are vibrant policy debates ongoing within the GOP, but one man’s vitality is another’s civil war. For the untrained observer, the violent, spasmodic death throes of a mortally wounded animal could just as easily be mistaken for signs that the withering creature is demonstrating renewed vigor. The GOP’s internal struggles could easily and rapidly evolve from a healthy exercise to something quite different.

And yet, even though Republicans struggle with all these issues and more, Democrats would be wise to focus on their own house. There are indications that the party’s future is not as rosy as the Republican autopsy would lead many to believe.

The 2014 generic congressional ballot appears increasingly favorable to Democrats. The Republicans’ misguided government shutdown has resulted in the electorate directing their inchoate rage at Republicans. But there is more than a year between today and the midterm elections, and a series of events – both foreseen and unexpected – will intervene in the interim to alter public opinion. Further, Democrats are doing all they can to rehabilitate the shutdown by vindicating its impetus – the Affordable Care Act and all its myriad issues. Increasingly, Congressional Democrats are admitting, after just one week of sustained media coverage of the ACA’s roll-out, that the nearly four-year-old law is still not ready for prime time. It may never be.

The technical failures associated with the ACA mask its larger problems: too many who need coverage are signing up and those who do not need coverage are not contributing to the risk pool. This was always the law’s structural Achilles’ heel. Some observers believe that what more Democrats are calling for, a delay in either the individual mandate to purchase health insurance or the penalty phase should an individual fail to comply before next April, is functionally impossible. It would require the federal government consider bailing out the overextended insurers who have taken on a number of sick, elderly, and infirmed uninsured over the course of the open enrollment period. Populists on both the right and the left would revolt over the prospect of another federal bailout for a troubled industry.

The government shutdown and the ACA’s miserable debut have rescued President Obama from the political consequences of his inaction in Syria, but foreign policy issues are always just one news cycle away from returning to the forefront of the national debate. A report in USA Today last week revealed that Iran is nearly ready for a nuclear breakout – something most observers believe will precipitate a political (and potentially military) crisis in the region. Indeed, a political crisis is already underway as Saudi Arabia and Egypt – two of the regions strongest players – drift away from the American sphere of influence in conspicuously dramatic fashions.

Add to this the background radiation of the Obama administration’s drone warfare program and liberal Democrats’ increasing discomfort with this tactic and you have the makings of an internal struggle within the Democratic Party set to explode as liberal voters prepare to select President Obama’s successor.

Republican structural advantages in the 2014 midterms suggest that, outside of a historic Democratic wave – a virtually unprecedented occurrence given the fact that the Oval Office remains in Democratic hands – the GOP will retain the House in 2015. Furthermore, anti-incumbent anger may fall unevenly on the Senate where a number of Democrats are seeking reelection in states Romney carried by substantial margins.

Even if Democrats retain control of the Senate, increasingly restless liberal constituency within the party may again assert its primacy over Democratic moderates in the coming presidential primary. Recall that in 2005, the party’s presumed nominee, Hillary Clinton, was preparing herself and her allies for a coronation rather than a primary election. Pollsters were not even testing Barack Obama’s name before December of that year, in spite of his keynote address to the Democratic nominating convention the year before. Few envisioned a scenario in which the Iraq War would go so far south that it would motivate the left to jettison Clinton. In the same way, few foresee a political future in which liberal Democrats who believe they were robbed of a universal, single payer health care system might elevate another champion over the more moderate Clinton. At the least, a competitive Democratic primary that will force Clinton to the left of the electorate appears likely.

If Clinton foresees this political train wreck barreling down the tracks before the pundit class and decides to spare herself yet another historic embarrassment, the Democratic Party simply lacks a viable replacement. Only Vice President Joe Biden appears even remotely competitive against the GOP’s bench of rising stars, but early polls of battleground states indicate that he would underperform against New Jersey Gov. Chris Christie, Sen. Rand Paul (R-KY) and even Sen. Ted Cruz (R-TX).

The GOP is a rudderless party at the moment, a consequence of having lost a national election. But the forces of history are conspiring against Democrats. On both the domestic and foreign policy fronts, the seams that portend great fissures within the party are beginning to become apparent. Democrats should not get too comfortable with the present Republican disarray. Their own internecine feuds are only just beginning.