At What Point Does Lou Dobbs Become an Actual Liability For Fox? 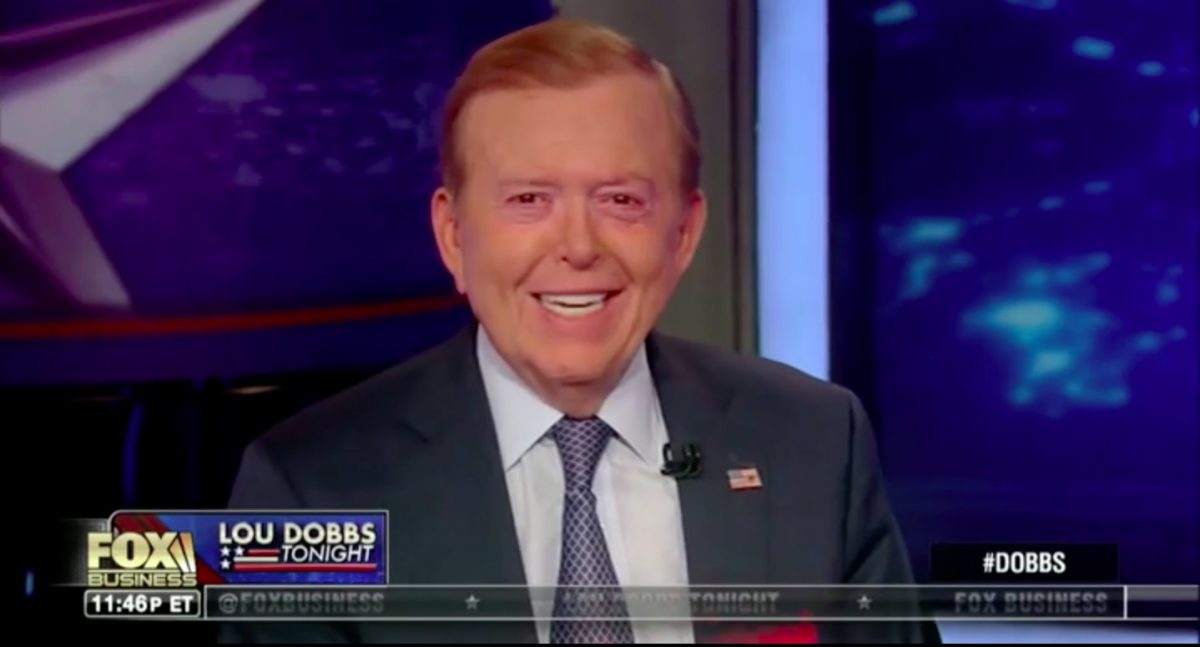 In this environment, in order to raise serious red flags at Fox, you have to say some incredibly troubling stuff. Yet “troubling” would be a vast understatement in describing the sorts of crazy and dangerous comments coming from the lips of Fox Business’ Lou Dobbs. This from a guy who used to be semi-reasonable, but who has completely flown off the handle within the past year. So why isn’t Fox stepping in and taking a hand?

Here’s how what Dobbs says differs from the partisan nonsense that often flies out of Sean Hannity‘s or Laura Ingraham‘s mouth on a daily basis: They’re shills for President Donald Trump, trying to spin stories any which way so they make it look like the sun shines out of the commander-in-chief’s (presumably) orange tush. Sure, they’ll use phrases like “deep state” or “fake news,” but the true insanity is usually kept to minimum, so as to appeal to an audience which consists not just of crazy people or idiots but also of those simply blinded by a tribal desire to defend Trump at all costs.

But you won’t find many out there who aren’t wearing a big fat tin foil hat who truly believe the FBI should be dismantled, as Dobbs suggested Monday night. Corrupt government officials? Common Fox News line. Crumbling institutions? Par for the course. The FBI should be destroyed? That’s veering into anarchic territory. Should a news outlet really be paying somebody to say stuff like that?

And if that were the only wacko thing he has said of late, that would be one thing. But it isn’t – not by a long shot. Just last month, Dobbs suggested that the White House ought to “assign someone to slap the hell out of… so-called journalists” at press briefings. (I wonder, does that include Fox News’ own chief White House correspondent, John Roberts, should he – ahem – get out of line?)

That’s to say nothing of Dobbs’s suggestion in March that Attorney General Jeff Sessions must resign as he has “fallen ill” and is “incapacitated”, and again in June, accusing Sessions of “showing his loyalty to the Deep State, over President Trump”. In fact, back in January, Dobbs suggested that it may be time to “declare war outright against the deep state.”

Perhaps most troubling – yeah, there’s more – is Dobbs’ suggestion that Trump’s political opponents be punished or imprisoned. He suggested in December that Barack Obama be “brought back” from abroad by US marshals after making comments that were less than complimentary of President Trump. Surely this goes above and beyond defending the president.

Here’s why Fox News may be loath to pull Dobbs or at least tone him down, though: According to Nielsen, Lou Dobbs Tonight is the top-rated program in all of business news, averaging 338,000 total viewers. Led by him, Fox Business and its programming beat out CNBC in Business Day viewers for the 22nd consecutive week earlier this month. Perhaps it’s easier to ignore Lou Dobbs Tonight and Fox Business at large as it’s not as high-profile as a Hannity or a Rachel Maddow Show (most popular cable news programs one and two, respectively), but it’s still pulling in a large chunk of viewers, and it’s still exerting a significant amount of influence.

So we’re looking at a business decision. Period. Keeping Dobbs on the payroll means tacitly condoning his zanier proclamations, or at the very least, looking the other way. At what point does it become more important to protect a business network and parent company’s reputation over its ratings? (We’re not necessarily looking at that dichotomy with this particular decision: FBN seems to be pretty strong, Dobbs or no Dobbs, but he’s certainly the cherry on top of the network’s ratings sundae.) One would think that point is already very much upon us.