The rise and fall of the “birthers,” America’s foremost conspiracy theory punchline, has been a veritable goldmine for the nation’s comedy industry. And as with all goldmines, people get possessive about who is encroaching on whose land. Earlier today, Bill Maher objected to The Onion stealing a joke about “afterbirthers” demanding to see the President’s placenta– a joke The Onion printed six months before Maher’s performance.

“I see The Onion stole my placenta joke that I did in Feb 2010 HBO special,” Maher tweeted today, apparently in reference to the publication’s article entitled “Afterbirthers Demand To See Obama’s Placenta.” The article, although nearly two years old, has understandably resurfaced in light of the President’s decision to release his long-form birth certificate and the subsequent denials by “prominent” birthers that the certificate seals the matter completely. The only problem? The publication date on the article is August 2009, six months before the HBO special. No word on whether The Onion has countered Maher’s accusation with a plagiarism claim of their own. Below is Maher’s tweet: 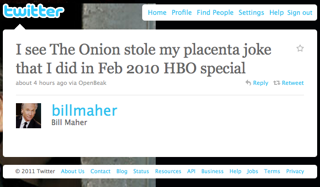 Maher deserves credit here for being one of the first people to predict that the day would arrive when, presented with undeniable proof of his citizenship, the birthers would have to take their conspiracy theory to its logical conclusion– if it is true that he came up with the joke all on his own. But even if true that, somehow, The Onion writers got a hold of the script of his February special in August and filched its contents, the joke appears far too self-evident to call plagiarism on. Just look at the way birthers reacted to the certificate. And then there are the jokes. The Daily Show made this precise joke last night (at minute 7:45), RuPaul tweeted a variation of this joke at Donald Trump‘s expense, or comedian Eddie Rawls, or every other search result when you type “afterbirther” into the Twitter search box. Even if Maher had chronology on his side, this was a rather unwise fight to pick.