O’Reilly Kindly Reminds Christine O’Donnell That He Has ‘Crazy Stuff’ On Her, Too 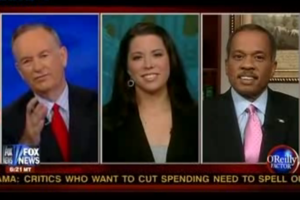 Bill Maher‘s personal video archive isn’t the only thing Delaware Republican Senate candidate Christine O’Donnell has to worry about now regarding her youthful indiscretions on television. On tonight’s Factor, Bill O’Reilly described her ascent in the media sphere with Bewitched jokes and wondered why liberals attacked her for “dopey” statements. Then he noted that O’Donnell was once on the Factor saying compromising things, and he kept the tapes.

“The left is trying to hurt her by drawing up dopey things she said in the past,” he noted, dismissing the tactic as ineffective. “The more they do this to Ms. O’Donnell, the stronger she’s going to get.” His panelists, Fox News contributors Juan Williams and Mary Katharine Ham agreed that the tactic was ineffective, though Williams offered that he found her background problematic and that “her track record would cause me to have real questions.” O’Reilly actually found the witch story, er, charming, noting that “if she was hanging out with Samantha and all those people… that’s a good thing!” (Samantha, for those of you that didn’t grow up with Nick at Nite, the titular witch in Bewitched). He later joked that Darrin (Samantha’s husband) told her not to go on Fox News Sunday, and expressed dismay that she canceled on colleague Chris Wallace. Then he explained his own dilemma with O’Donnell:

“I’m trying to be fair to Christine O’Donnell. She’s been on the program a couple of times, and we have some kind of crazy stuff that she said. We’re not going to play it yet. I don’t think it’s relevant– yet. We still like Ms. O’Donnell to come on the Factor. I’m not in the business of injuring her. I’d like to see if she’s the better candidate.”

It’s not anywhere near the outright blackmail campaign Maher is launching, but strange of O’Reilly to drop the hint that he has compromising video and may be willing to release it. That said, O’Reilly probably won’t have to put too much effort into convincing O’Donnell to come on his program should she choose to do national television again.

The panel from tonight’s Factor via Fox News below: