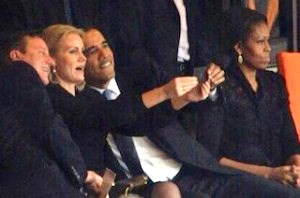 So far President Obama has not publicly commented on the “selfie” that he took with two other world leaders at the memorial for Nelson Mandela, but the two other people in the photo, British Prime Minister David Cameron and Danish Prime Minister Helle Thorning-Schmidt, have already taken to defending themselves against criticism of the “selfie.”

“It wasn’t inappropriate… There were lots of pictures taken that day, and I just thought it was a bit fun. Maybe it also shows that when we meet heads of state and government, we too are just people who have fun.”

She continued, “There was dancing on the stands… And then we took a really fun selfie.”

RELATED: Guy Who Took Photo of Obama Selfie Tells Internet to Get a Life

Meanwhile, Cameron addressed the selfie in a Parliamentary session early Wednesday, mainly just laughing it off as an innocent moment. One MP brought up the issue of cell phone roaming charges, and asked rather cheekily, “Has the prime minister had the opportunity to discuss international mobile phone usage with any other European heads of government over the last day or so?”

As the entire room burst out laughing, Cameron argued that the selfie wasn’t inappropriate, and was, in fact, in the spirit of the celebration of a great man’s life.

“In my defense, I’d say that Nelson Mandela played an extraordinary role in his life and in his death at bringing people together, and so, of course, when a member of the Kinnock family asked me for a photograph, I thought it was only polite to say yes.”

You can watch Cameron’s remarks to Parliament below, via The Telegraph: