Khadr, then 15 years old, was indicted in the death of U.S. Army Sgt. 1st Class Christopher Spee, who was killed by a grenade during a 2002 firefight in Afghanistan. The Canadian citizen was held in Guantanamo Bay for 10 years, though the U.S. military commission that oversaw Khadr’s case didn’t convene until 2010, when he finally plead guilty to war crimes charges. At the time, the case was widely criticized for its treatment of Khadr as an adult — despite his being a minor at the time of the alleged incident.

In 2012, Khadr was released and repatriated to Canada under strict conditions. In an interview with Fox News back in May, Sgt. Spee’s former colleague, Sgt. Layne Morris, criticized Khadr’s early release. 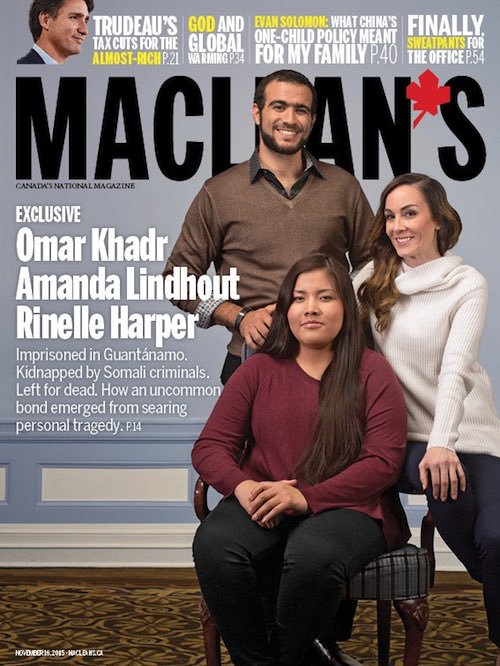 The murky nature of what happened to Sgt. Spee, and Khadr’s memory of the event, have largely cast further doubt on whether or not the former 15-year-old was responsible for the U.S. soldier’s death. After all, when he was found following the firefight, he was severely injured and buried under several feet of rubble.

According to The Enemy Within: Terror, Lies and the Whitewashing of Omar Khadr author Ezra Levant, however, Khadr’s being featured on the Maclean’s cover is an egregious mistake.

“It’s a disgrace that he is on the cover of a mainstream news magazine, being portrayed as a victim, and in the company of two real victims, including a victim of Islamic terrorism,” he told Fox News. “They have managed to transform a pathological murderer into a ‘victim,’ providing Al Qaeda with a great PR victory.”

They have managed to transform a pathological murderer into a ‘victim,’ providing Al Qaeda with a great PR victory

Meanwhile, others on social media took notice and decided to voice their concerns.

@MacleansMag @AmandaLindhout Personal tragedy??? Omar Khadr is a confessed murderer and terrorist!! How do you people sleep at night??

As a Canadian I apologize 4 the leftist media’s glorification of Omar Khadr. He is a murderer not a hero. #shameful https://t.co/LBCNfxTTHR

Is it ethically ok for #humanrights NGOS to portray Omar Khadr as a human rights hero given that he also murdered someone? #cndpoli