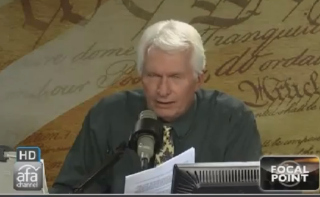 Yesterday we reported that a group of scientists may have discovered that homosexuality is passed down genetically from the opposite gendered parent through epigentic marks.

“Long thought to have some sort of hereditary link … homosexuality is linked to epi-marks — extra layers of information that control how certain genes are expressed. These epi-marks are usually, but not always, “erased” between generations. In homosexuals, these epi-marks aren’t erased — they’re passed from father-to-daughter or mother-to-son,” explained the press release.

During his Wednesday show, Christian radio host Bryan Fischer interpreted those findings to mean that homosexuality is a “birth defect.”

“This is the latest effort on the part of scientists to explain some kind of biological origin for homosexuality,” Fischer said, adding that “they don’t even know it,” but if you track their logic, “they are suggesting homosexuality is some kind of birth defect.”

The scientific community would never admit that, he continued, explaining that the press release essentially says that the non-erased epi-marks mean an “abnormality.”

“This is a birth defect,” Fischer declared. “Homosexuals do not want the gay gene to be found. If it exists, they do not want it to be found. For the simple reason that it’s fairly routine now to do prenatal genetic testing for as many as 3,500 genetic defects,” he continued, likening homosexuality to known birth defects like Down’s syndrome.

“I think homosexuals are afraid, and I think with good reason, that if there is some kind of gay gene and it’s found, parents are going to want to know,” he said. “‘Does my kid in the womb have the gay gene? If it does, I’m going to abort it.'”

Watch below, via RightWingWatch: