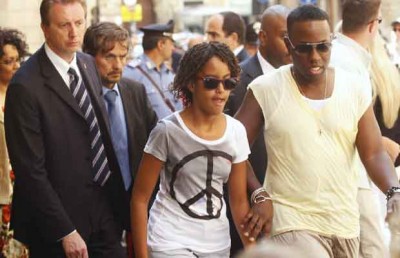 Two high-profile stories about the intersection of racism and the Republican Party are exploding all over the internet. The flap over comments at Free Republic and the Young Republicans’ election of a new president make for a sour cocktail this weekend.

Most of the heat is being generated by this Vancouver Sun story about the comments on a Free Republic article featuring 11 year-old Malia Obama:

“A typical street whore.” “A bunch of ghetto thugs.” “Ghetto street trash.” “Wonder when she will get her first abortion.”

These are a small selection of some of the racially-charged comments posted to the conservative ‘Free Republic’ blog Thursday, aimed at U.S. President Barack Obama’s 11-year-old daughter Malia after she was photographed wearing a t-shirt with a peace sign on the front.

You might think that this is the same as the lame attacks that Bill O’Reilly levels at commenters on DailyKos and/or Hot Air. There are key differences. The Sun report says that the offensive comments overwhelmingly outnumbered those critical of the vitriol, but the real problem is this:

After attention from other blogs, the thread was suppressed and placed under review, but before long it was returned to the site intact, and attracted a new series of racial slurs when the original complaint email was posted publicly to the site, with the sender’s email address intact.

So, they knew about the comments, put them back up, and apparently made the complainer a target for harassment. Very ugly. Eventually, they took it down again.

As disgusting as this story is, it didn’t stand to hurt Republicans that much on its own. Freepers are not exactly considered the bellwether of mainstream conservative thought.

Then, even after an impassioned plea by very young Republican Meghan McCain, the Young Republicans elected a new president with serious racism problems.

The Young Republicans faced a stark choice at their convention in Indianapolis yesterday as they chose their next leader: a center-right twentysomething interested in greater outreach, or a self-described “true conservative” who is almost 40 and spent last week dealing with Daily Beast reports about her beliefs, which are, at best, often hateful, and at worst, downright racist. The delegates, in a vote of 470 – 415, chose the latter.

Fair or not, the effect of these two stories is devastating. Already on Twitter, I’ve seen comparisons of the Freeper story to the Letterman/Palin feud, with liberals asking where the conservative denunciation is. The Young Republicans story serves to neutralize the “few bad apples” rationale on the Freeper story.

As a liberal with a lot of conservative friends, I hate to see conservatives get painted, en masse, with this brush. While this makes them understandably defensive on the subject, that defensiveness can lead to tone-deaf handling of these situations. While some liberals’ idea of the GOP as the Ivory Soap of racism is way off the mark, many conservatives are also in denial about their party’s race problems. The truth, as they say, lies somewhere in the middle.

On the issue of racism, the truth can be elusive. I think there’s always more racism, in general, than white people think there is. On the other hand, I think there’s a lot less of it in the Republican Party than most liberals think. Part of the perception problem that the GOP has today is that the Democrats have a black President. Where else are the racists supposed to go? Just because most of the racists belong to one party doesn’t mean that that party is mostly racists.

Still, when your party stands in opposition to policies that are seen as benefiting minorities, this kind of thing can really be damaging.

I’ll tell my liberal friends exactly what I told conservatives who asked me where the liberal outrage was on the Playboy story: Give it a minute. This story broke on a Saturday afternoon. Two of my conservative friends who write for very influential blogs just heard about it this morning, from me.

To my conservative friends, I hope their reactions, and those of the Republican leadership, veer away from the kind of persecution complex stuff that Newsbusters’ treatment portends, and closer to this. This story is already drawing attention from media heavy-hitters like Jake Tapper, Major Garrett, and David Shuster. The conservative response can be a big win.

As for the Young Republicans, I think Meghan McCain’s got their number.

Update: The plot thickens. Gawker reports that Chris Parry, the Vancouver Sun reporter who broke this story, was also a blogger for Daily Kos, and has suggested, in the past, posting hate speech and blaming it on conservatives (Gawker repeats this claim by the freepers, but I haven’t found anything in Parry’s DailyKos posts to back this up). This does little to change the facts in this story, as Parry could hardly have pulled, then reinstated, the offensive thread. It might mean a rough week for Parry, though. Parry responds here.