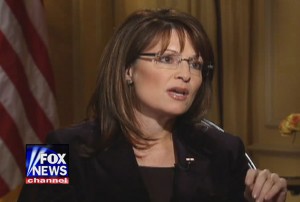 Earlier today, former Alaska Governor Sarah Palin caused a stir with a retweet that many read as a cryptic indicator that the Mama Grizzly was poised to come out in favor of some gay rights. Prominent Palin fansite Conservatives4Palin.com, however, has swooped in to defend her honor, noting that Palin’s retweet of Tammy Bruce‘s sentiment, “But this hypocrisy is just truly too much. Enuf already–the more someone complains about the homos the more we should look under their bed,” doesn’t indicate support for gay rights. I’m inclined to agree.

Apparently, her re-tweet of a Tammy Bruce tweet is making news. What a lot of people are missing is that it’s possible to share the sentiment that Tammy expressed in her tweet and still oppose repeal of DADT and other issues. I don’t know Governor Palin’s opinion on the issue. However, I think it’s a stretch to claim that she is a proponent of repealing DADT based on one re-tweet.

I don’t believe Tammy was actually criticizing people who genuinely oppose repeal of DADT. After all, the most visible and vigorous opponent of repealing DADT was John McCain, someone who no one will mistake as a fanatic. The people Bruce is mocking are those on the right and the left who spend every waking hour of their day thinking about homosexuality.

I think they sort of hit the nail on the head here. First of all, it’s a retweet. It might well have been an accident, especially given the lack of follow-up. Assuming it wasn’t a mistake, though, the notion that Palin would criticize those who make gay rights a priority, either way, has basis in fact. Palin, herself, has spoken out against the repeal of DADT, and in favor of a Constitutional amendment banning gay marriage, but hasn’t done so for a very long time. Since the 2008 presidential campaign, she has generally avoided gay rights issues.

She also made a point of bringing up a headline-making Facebook rant that featured several anti-gay slurs, but ignored the portion of the rant that actually made headlines.

When she did address the DADT repeal, in fact, it was to criticize President Obama for making it a priority:

Where I differ from C4P is that I don’t think it’s out of a differing sense of priorities, but out of a keen sense that this is a losing issue for her. Most of her fans know where she stands already, but beating that drum now would derive her little gain, and could only serve to alienate potential Palinistas. Even conservatives who oppose gay rights now do so with a ginger understanding that everybody knows, and loves, a few. Even in that Fox News clip, she didn’t bring it up, and pretty much avoided the central issue.

With that in mind, this retweet might simply have been a way for her to enter the debate, without really taking a stand, to let gay people (and their allies) know that it’s okay for them to like her, without actually taking a position that benefits them.

Of course, only Palin knows for sure, but I wouldn’t bet against Conservatives4Palin. For the time being, Palin fans can still oppose gay rights, until they get a clearer memo.

That is not to say that Palin’s tweet wasn’t newsworthy, or that people like our own Matt Schneider were off-base in reading into it. Absent a clear explanation, theirs was an intriguing interpretation, and I suspect that the rush to welcome Palin into the 21st Century might end up having a small shaming effect. If not on Palin, then perhaps some would-be supporters will wait for a pro-gay clarification, and drift away if it doesn’t come.

Update: As my friend Brad Friedman pointed out, C4P’s interpretation of Tammy Bruce’s tweet, to include those on the left who prioritize gay rights issues, makes no logical sense. Bruce is narrowly talking about those who “complain” about “the homos.”

That fact notwithstanding, I believe they still managed to come to a meaningful conclusion, even if accidentally.