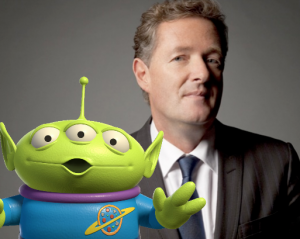 With all the hubbub in the past week over a White House petition to deport CNN host Piers Morgan, I’d like to take a moment to just clarify the obvious: he’s not actually going to be deported. I mean, no one actually thinks this is going to happen, right? But it’s not just because of the obvious reasons, it’s also because it’s predicated on the idea that the White House petition site is supposed to be this great democratic tool for citizens to voice their concerns and have them seriously addressed. Quite plainly, there is only any cause for concern if you put amy stock in the efficacy of the White House petition site in the first place.

Now, some people would point to the fact that last Friday, Obama released a web video personally responding to the White House petition calling for more gun control. But was it really that big of a political leap to think that Obama would address this topic to begin with?

In theory, “We the People” is a great way for people to make their voices heard. But perhaps there is a kind of pointlessness to a website specifically for people to voice their concerns when it has become easier than ever . All the White House petition site allows for is to exactly quantify the number of people who are passionate about a certain topic, or who just want to have fun trolling the highest e-office in the land. Examples of the latter include petitions to investigate alien life, build a Death Star, and to secede from the United States. (I maintain that a significant percentage of people who signed the secession were just trolls trying to help mainstream a patently absurd idea for the fun of it.)

Another possibly meaningful purpose it serves is to capitalize what’s in the national zeitgeist. Much in the same way people rush to update someone’s Wikipedia page when they die or get arrested or something, when there is some kind of giant political event underway, a petition generally pops up on the White House website to reflect what’s in the news.

The White House created the “We The People” petition site late last year, and I’ll admit I was skeptical early on. And what I said last year bears some repeating now, for the many of those who still hold some stock in the value of making your e-voice heard.

The responses the White House has issued sound just a wee bit condescending, and have clearly been worked on by speechwriters and policy wonks to be as broad and non-controversial as possible. It’s a stump speech rebranded as seeming interest in the concerns of average voters. Even if you agree with what the White House is saying, you can’t help but note what a remarkable distance the response is from what was actually addressed.

Put quite simply, the White House responds to the petitions it wants to respond to, and with perhaps one or two exceptions over the past year, none have actually changed the minds of President Obama or his advisors on any substantive policy.

Which brings me to the media coverage of the petition site, and the apparent newsworthiness of a simple petition on the White House website. The mere fact, for example, that the petition to recognize the Westboro Baptist Church as a hate group has become the most popular petition on the site is a story all of its own. Well, why is that? For God’s sake, there’s a petition with over 45,000 signatures to impeach Obama. The media should treat each of these petitions as seriously as the White House do.

Because here’s the rub, and it’s a little provision contained in the site’s Terms of Participation:

The White House may elect to respond to petitions at any time, including those that have not crossed the first or second threshold.

Translated, that basically means the White House will respond to your petition if it gets over 25,000 signatures in 30 days, except that they might take months to respond to a particular petition, if that, and also they might respond to petitions that haven’t crossed the threshold if they deem it important enough. Which, again, all basically boils down to “we’ll answer what we want to answer.”

Maybe the White House website has become less about petitioning the government to seriously address policy, and, in the spirit of the Festivus season, perhaps it’s simply become nothing more than an airing of greivances.