Did Chris Christie Take A Shot At Both Mitt Romney And President Obama?
video

Did Chris Christie Take A Shot At Both Mitt Romney And President Obama? 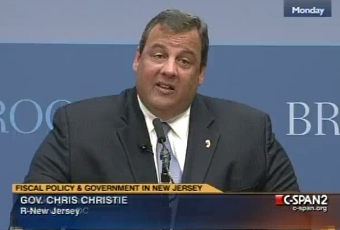 Speaking Monday afternoon before an audience at the Brookings Institute in Washington, D.C., New Jersey Governor (and Mitt Romney endorser) Chris Christie explained his fiscal policy and offered up a defense of his in-your-face style of politics, saying that regardless of “bullying” accusations you at least know where he stands on everything.

At the end of his speech, Christie gave some interesting leadership advice to his fellow politicians, especially those in Washington:

Sound like any politician in the national spotlight you know of?

The media sure thought so. Yesterday, a slew of headlines appeared about Christie’s supposedly negative remarks on presumptive Republican nominee Romney. MSNBC’s Martin Bashir dedicated a short segment to explaining why these “honest” remarks, indirectly critical of Romney, guarantee Christie will never be Romney’s VP pick. US News and World Report wrote that Romney is “perhaps the man [Christie] most maligned” with those comments.

It’s true, Christie’s remarks might sound like an indirect potshot at Romney who has long faced criticism for his robotic (read: “programmed”) demeanor, his flip-floppery on key political issues, his seeming aloofness, and his inability to connect with average people. The shoe sure does fit.

But really, if we want to see this as some maligning of a presidential candidate, it also fits for President Barack Obama (and pretty much any politician on the national stage). President Obama is pretty enigmatic and/or contradictory (“I was for gay marriage before I was against it and then for it again”); some view his speaking style as robotic, although charismatic (hey! sounds like most other politicians, too!); and he sure does seem to listen to his political consultants on what works best for his image (i.e., he abandoned medical marijuana patients for popularity’s sake, he dropped the whole “closing Gitmo” thing, and he’s now a hawk with a secret “kill list”).

Of course, the reality is that Christie’s comments were (indirectly or not) aimed at neither politician, and were just an accurate assessment of how politicians in both parties operate. Christie’s screw-’em-all honesty (like it or not) is truly an outlier in politics, and not something I expect most politicians to pick up in the future.

Check out the clip below, via C-SPAN 2: