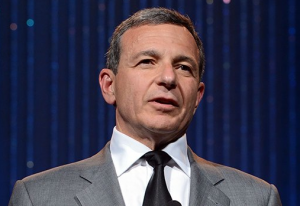 During Disney’s annual shareholders meeting, the company’s CEO Bob Iger defended ABC News and ESPN against the charge of “liberal bias.” Iger conceded there have been mistakes, but stood behind the news organizations’ integrity. The goal is to be “fair and unbiased,” he underlined.

Justin Danhof, a shareholder speaking on behalf of the conservative National Center for Public Policy Research, was the one who broached the topic — asserting that the ABC and ESPN “deserve their share of the blame for the nation’s skepticism.” For examples, he pointed to Brian Ross‘ linking the Aurora shooter with the Tea Party and Rob Parker “saying that Washington Redskins quarterback Robert Griffin III was a, quote, ‘cornball brother’ who was not down with the black cause because his wife is white and he is a Republican.”

“Liberal bias pervades Disney’s media outlets,” Danof asserted. “It’s time to stop denying the bias and do something about it. Our company’s leaders should show the intellectual honesty to admit it exists, it is a problem, and let’s start working together on a solution.”

From a shareholder’s perspective, Danof said the bias harms the company’s image and decreases “revenue potential.” Here, he cited a Gallup poll that showed 40 percent of Americans identify as “conservative,” compared to 35 percent as “moderate” and 21 percent “liberal.”

“I’m not asking that you turn ABC News into Fox News, or that you start airing Glenn Beck and Rush Limbaugh daily on ESPN,” Danholf said. “I’m just asking you to start playing it straight with the American people. Stop the bias and return to an era of objectivity and honesty in the news.”

Iger replied that their goal is “to be fair and to present the news that they cover in as unbiased a way as possible.” He added, “Without meaning to sound overly defensive, I believe that, overall, the body of their work in fact is fair and unbiased and accurate.”

“However, I will say that over time we have been guilty of making mistakes — not specifically commenting on those you cited — but I can tell you that in managing this business over the years, we have at times either presented the news in a slightly inaccurate way through mistakes, or in ways we weren’t necessarily proud of. But I firmly stand behind the integrity of our news organizations, because I believe that overall the job that they do is one that is worthy of respect, and certainly one that delivers to the value of the Walt Disney Company and to its shareholders.”