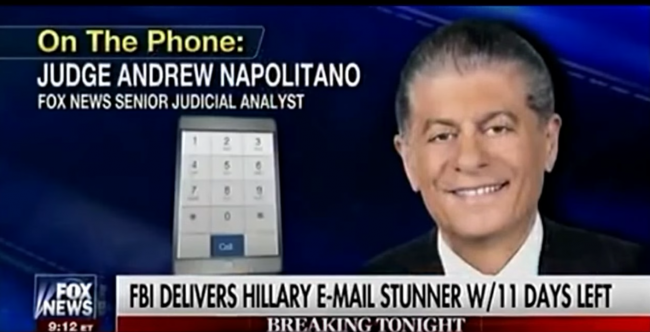 On Friday, the White House issued a (sort of) apology to the British government after Press Secretary Sean Spicer insinuated that the British intelligence service, GCHQ, had helped President Obama wiretap Trump Tower.

Like the original wiretapping claim, it was an idea that originated not with U.S. intelligence services, but the media. In this case, it was none other than Fox News’ favorite in-house judge, Andrew Napolitano.

Recently, the silvered-haired Senior Judicial Analyst told Brian Kilmeade at Fox & Friends that “three intelligence sources” had “informed Fox News” about the espionage. The comments were boilerplate Napolitano, who has in the past compared compulsory voting to dictatorship and suggested that the Civil War was caused by “tariffs.”

Unlike in those instances, however, there is a very important and receptive new listener — the president of the United States. In fact, far from just Napolitano, Trump’s voracious consumption of Fox News now means that every single reporter, anchor, contributor, expert and intern who appears on air cannot rule out the possibility that the leader of the free world is not only watching them, but may repeat, verbatim, whatever comes out of their mouth.

It’s an honor for sure, but also an awesome test of credibility — and one that Fox is not exactly passing right now.

“Fox News cannot confirm Judge Napolitano’s commentary,” said Shepard Smith on his show. He was later echoed by fellow anchor Bret Baier.“We love the judge,” said Baier” “We love him here at Fox, but the Fox News division was never able to back up those claims and was never reported on this show.”

By emphasizing Napolitano’s “commentary” Smith played a familiar card, drawing a distinction between the channel’s news and opinion coverage. But that doesn’t fly this time because the issue was not Napolitano’s opinions. The judge went on television and said “three intelligence sources” had told “Fox News” what he was saying. As we now know, this was a lie. Clearly nobody told “Fox News” anything, but in fact spoke with the judge alone. One of those “sources,” it has now been revealed, is most famous for a fake claim he made about Michelle Obama in 2008.

It probably wouldn’t have mattered before, and the segment might just have melted into online obscurity and those emails your crazy aunt sometimes sends. But not anymore, not with Trump watching.

The issue is not merely isolated to Napolitano either. On March 7, Fox & Friends ran another segment about a U.S. airstrike that killed a terrorist who had been released from Guantanamo Bay in 2009 by President Barack Obama. Immediately after describing the death of this terrorist, the network accurately stated that at least 122 released Guantanamo detainees had “returned to the battlefield.”

In fact though, only nine of those detainees were released by Obama (the rest were set free by George W. Bush.) Now I wouldn’t accuse Fox & Friends of deliberately trying to mislead their audience, but I do know one person who definitely got the wrong idea after watching that.

122 vicious prisoners, released by the Obama Administration from Gitmo, have returned to the battlefield. Just another terrible decision!

It all adds up to a four-step process which looks something like this.

This is a bad look for Fox.

Shep and Baier are good journalists. It would be a sad chapter of their careers if they were forced to regularly report about wild presidential conspiracies that originate from their own network.

Now in all fairness, Fox isn’t alone with this and you can just as easily replace point 4 with Breitbart or The Gateway Pundit, but neither of those organizations have Fox’s power and reach.

Taken to its logical conclusion, our era of casual BS is very dangerous.

Given the world we live in, it is not unreasonable to say that any falsehood or misleading statement from Fox News can precipitate a major crisis. What if “three intelligence sources” tell Judge Napolitano that Iran is cheating on the nuclear deal or that North Korea is planning a first strike somewhere?

You don’t need to be Henry Kissinger to see how things could get very ugly, very quickly.

Fox News would do well to learn from the Napolitano incident and hold their commentators to the same factual standard as their reporters. Their legacy going forward in the Trump era will depend on it.