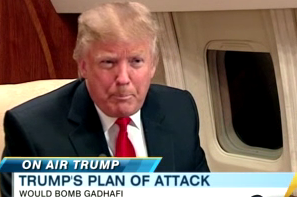 WithSarah Palin‘s reliability as a lava-hot content generator on the wane, and her poll numbers tanking, the shared liberal/conservative dream of a Palin presidential nod is in real peril. Into that breach has stepped up-and-coming contender Donald Trump (R-$$), who’s not content to pay the Republican “Crazy Tax,” instead appointing himself Secretary of the Crazy Treasury. Can The Donald supplant Palin as the GOP base’s go-to rabble-rouser, or can Palin reload?

Palin continues to draw plenty of media attention, but months of big news stories have taken their toll on her ability to deliver clicks, an indication that her spell may be wearing off (paging Christine O’Donnell?).

Meanwhile, businessman, Apprentice star, and self-proclaimed Gaddafi-screwer Donald Trump has seen his stock with red state red-meaters rise. Since his CPAC coming-out, Trump has been engaging in so much moonbattery, his friends now call him the Lunar Duracell. After dipping a toe in the Birther waters, Trump has gone The Full Orly, threatening to replace his “You’re fired!” catchphrase with “You’re Kenyan!”

Trump also concocted a bizarre story in which he claims to have “screwed” Libyan dictator Muammar Gaddafi in a real estate deal that Trump actually knew nothing about at the time, which he was forced to break under threat of criminal prosecution, and used it to posit real estate rookery as a foreign policy tool. In a few short weeks, Trump has completely changed the artificial horizon of the 2012 GOP landscape, threatening to usurp Palin as the candidate liberals most want to see enter the race. MSNBC’s Lawrence O’Donnell even says he’s “ban(ned) any negative comment about Trump” on his show, for fear it might discourage Trump from running.

Palin, by contrast, has been relegated to rattling off other people’s talking points on Libya, and taking desperate swipes at non-candidates like Chris Christie (R-NJ), to diminishing returns. She just doesn’t generate the buzz she used to. Granted, Palin has been doing little to help her cause. In her recent swing through India and Israel, she didn’t bring a harpoon to the Wailing Wall, or even begin barking out cold cut orders upon her arrival in New Delhi.

Still, I have faith in Palin, who has been counted out more times than a box of Rain Man’s toothpicks, first when she lost the vice presidency, and then when she resigned her post as Alaska Governor. Since she’s slipped the gubernatorial bonds, Palin has logged countless hours on Fox News Channel and TLC, coined new words and phrases like “Death Panels” and “refudiate,” and done more to reinvent Facebook than a vengeful Winklevoss twin. There have been numerous ebbs in the Palin media tide, but she always comes roaring back.

All kidding aside, Palin has something that Trump can probably never get: a large, loyal constituency. There is a huge group of people who either love to love Sarah Palin, or love to hate her. Trump, on the other hand, has a penchant for getting attention, but isn’t very likable, and his antics wear thin quickly. Even if he somehow manages to bring Gary Busey and Meat Loaf on the stump with him, I doubt he can sustain interest the way Palin can.