Shortly after it was noticed that Fox Business host Lou Dobbs had tweeted out personal information of one of the women who had accused Donald Trump of inappropriate sexual contact in a bombshell New York Times report, Twitter reacted with disgust.

While the original tweet that Dobbs quoted was eventually deleted, it did stay up on Dobbs’ timeline for a at least two hours, being shared hundreds of times prior to being wiped out.

Below are some of the most notable reaction tweets to Dobbs’ action:

Men like @LouDobbs who are attacking these women … TRUMP ADMITS AGAIN AND AGAIN ON TAPE that he has done these things. STOP IT DOBBS! https://t.co/A6vu9pxgO1

.@FoxBusiness Lou Dobbs MUST be fired for doxing a sexual assault victim. https://t.co/gskzJGmg7a

.@Twitter @Support why is @LouDobbs not banned for doxxing a rape victim? Is your TOS real or selective @Jack? @Safety?

I'm blocked by him but if @LouDobbs truly RT'd a Trump sex assault victim's contact info he should be reported to @twitter and maybe police.

If the next phase of this monstrosity is going to be to threaten and encourage threats against these women, we are way beyond the pale.

Below is a screengrab of the original tweet in question with Jessica Leeds’ info redacted: 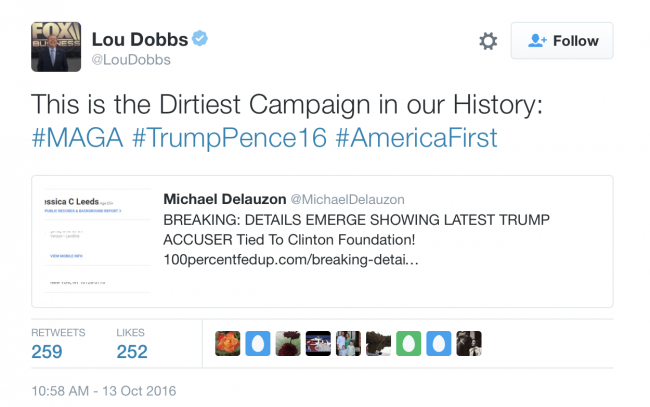