Fly On The Turkey: Overheard Thanksgiving Dinner Conversations With The Obamas, Rubios & Clintons 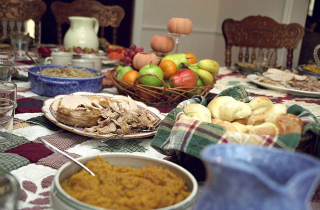 Wouldn’t it be awesome to be privy to certain family conversations on this Turkey Day? Here’s a sample of three that are likely taking place on the best Thursday of the year…

The first conversation to share appropriately comes from the First Family at the White House:

Barack Obama: “I’m thankful to be with everyone at this table today. My wife, Michelle. My beautiful children, Sasha and Malia. And most of all, thank you, Cleveland! We have some other special guests here today, right Michelle?”

Rachel Maddow: “It’s an honor, guys. So much to be thankful for today…I mean, to think only a few years ago I was wandering in the wilderness of Air America. And now, I’m beating Hannity like a turkey drum in the all-important key demo. You may also notice I’m wearing my extra-thick dark rim glasses, which I never wear on my show but always sport during every guest appearance regardless of venue. My producers say they make look even more intelligent, if that’s possible…”

Lawrence O’Donnell: “I echo Rachel’s sentiment. I mean, look at me: I declared myself a friggin’ socialist on national TV. Yet here I am with MSNBC’s best 10:00 PM show since Lockup’s Return to Rikers. And now I’m dining with the actual President of the United States…not the Martin Sheen version. “

Barack [yelling over to the kiddie table]: “Chris, is there anything you’re thankful for?”

Barack [interrupting quickly]: “Chris, it’s so loud in here with Bruce on the iPod that I can barely hear you from way over there. I’ll come by later during desert to catch up.”

[Like DeNiro in Meet the Parents, Chris points two fingers to his eyes, then points to the President. He then continues his conversation with Bo.]

Michelle: “So, who wants to say grace?”

[Joe Biden enters the room, almost out of breath.]

Joe Biden: “Sorry I’m late! Thought I was hosting my New Eve’s Party tonight in Delaware… [Catches breath, sits down at the head of the table.] I’ll say grace: ‘Lord, ignore that whole thing I said during the VP debate about abortion and being both for it and against it. It was just business. Anyway, come Lord Jesus be our guest, and let thy gifts to us be blessed.’”

Barack: “After campaigning non-stop for the past four years, er…months, it’s finally nice to have a home cooked meal! Lawrence, could you pass the crust-free whole wheat bread?”

Rachel: “This skinless breast turkey is to die for, Michelle. I don’t even miss not having any gravy to put on it.”

Lawrence: “For desert, I bought the last box of Twinkies on the shelf!”

Michelle: “Well, I’ll allow it this one time. [Barely audible.] The plan to rid the world of those death treats worked to perfection”.

Meanwhile, 1000 miles away in a modest farmhouse outside of Iowa City, the Rubios sit down for what looks to be the next of three straight years of Thanksgiving dinners in the Hawkeye state:

Marco Rubio [looking at the snow outside]: “Well, this certain beats being in dreary old Miami.”

Jeanette Rubio: “Yes, I was really getting tired of having fun all the time.”

Karl Rove: “Those sound like some lines from Caddyshack. Anyway, as your campaign manager I’d like to talk strategy for 2016. Who are you thinking could be your running mate?”

Jeanette: “Isn’t it a bit soon to be discussing this sort of thing?”

Karl: “Absolutely not. We have the first GOP debate coming up in less than six weeks.”

Marco: “What do you think of Mia Love?”

Marco: “Ah, right. By the way, can you do something about all the negative press I’m ALREADY getting? Just yesterday during an interview, I implored Americans to shop heavily on Black Friday to take advantage of great deals and to help stimulate the economy.”

Karl: “OK, what was wrong with that?”

Marco: “Get this: I turn on MSNBC and they end up doing five straight hours on calling me a racist for using the term ‘Black Friday’. I mean, what the (expletive)???”

Bill: “I’m so happy we finally got everyone dear to us in the same room for the first time in months! Here’s a Thanksgiving toast to my two leading ladies: Chelsea and Hillary.”

Hillary: “Thanks Bill. For the past four years, I feel like I’ve been going from hotel to hotel and not even knowing where I was waking up each morning half the time. It’s been exhilarating, but exhausting.”

Bill [mumbling]: “Welcome to my life…”

Chelsea: “I’m sorry. I don’t recognize everyone here. Can we do some introductions?”

Bill: “I gotta tell you Mark…I wasn’t happy about the way you made us into self-absorbed freak shows in there. But all was forgiven when HBO decided to only cover the Palin-McCain part of the book for that movie they play 80 times a day. Our story was just as damaging and therefore probably just as interesting to half the country, but Bill Maher made sure it never saw the light of day. It’s almost as if the campaign never happened!”

Mark: “Which opens the door to 2016…did you know you’re leading Biden by 41 points in Iowa right now?”

Hillary: “Don’t mind him, Mark. He’s just happy to be in position to break FDR’s record for most nights spent at the White House.”

[Bill chuckles while looking down at his phone, responding to a text]

Mark: “I’m sure they’re talking about this at the Rubio table right about now, so let’s go there as well: Who’s your VP choice?”

Mark: “Genius! He’s like the next Lieberman, but infinitely more likable. Did you see him kick ass on SNL last week?”

Bill: “You’re comparing him to Lieberman? Please. He’s like Nicholas Brody…that guy from Homeland. Christie totally infiltrated the Romney camp, got Mitt to trust him…just like Brody did with the Vice President on the show. After that, he totally destroyed that campaign from the inside, just like Brody is about to do with that crazy hottie Claire Danes.”

[Everyone looks confused at first, then absorbs Bill’s point and nods.]

Mark: “A Clinton-Christie ticket. The Republicans won’t know what hit them. We’ll have the movie version ready to roll a month after we, er…you win.”

Bill: “As long as Travolta doesn’t play me again, I’ll eat to that!”

Hillary: “Sharon Stone should play me.”

Chelsea: “And Lady Gaga as Chelsea!”

And on that note, have a Happy Thanksgiving weekend… and enjoy the welcome break from politics and cable news that hopefully comes with it.