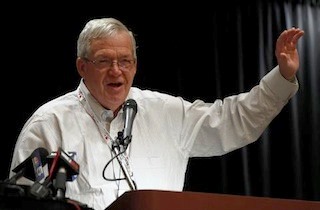 Former House Speaker Denny Hastert told the Daily Beast on Thursday that the “Hastert Rule”—an unofficial mandate that a Republican speaker not bring a bill to the floor unless it has the majority of the GOP caucus’ support—was meant more as his personal guideline than as the hard-and-fast rule it’s come to be taken as.

The Hastert Rule has been cited frequently since Boehner became speaker in 2010, including during the current brinksmanship over a continuing resolution. Hastert, who served as speaker from 1998 until the Democrats regained the House in 2007, traced the origin of the rule to a 2006 press conference, when a reporter asked if he would bring a bill with more Democratic than Republican votes, and Hastert responded that relying on the minority caucus was “something I would not generally do.”

“Generally speaking, I needed to have a majority of my majority, at least half of my conference,” Hastert said. “This wasn’t a rule. I was speaking philosophically at the time…The Hastert Rule is kind of a misnomer.”

Hastert did not explicitly criticize Boehner for the government shutdown, but did recommend order and compromise in budget negotiations.

“I don’t want to overmanage John Boehner,” Hastert said. “I’m not in his shoes. But when we had things that were tough to do, I was constantly engaged—sitting at the table, bringing in conservatives, moderates. You can’t be in Congress and shut down government and get anything done. It’s an oxymoron.”