George Will: All This Anonymous Campaign Money Doesn’t Matter
video

George Will: All This Anonymous Campaign Money Doesn’t Matter 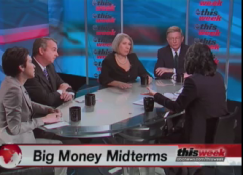 Other than Juan Williams the storyline making the most headlines this week is the enormous sums of anonymous money being funneled into this year’s midterm campaigns. As former RNC head Ed Gillespie reminded everyone on This Week this morning, this is now “the law of the land.” However is it damaging our electoral process?

Nope! Says George Will. And then, as he is reliably wont to do, he proceeded to throw a healthy bucket of cold water on this week’s political hysteria.

In this gusher of money we may spend in this year, in the two year cycle, $4.2 billion or something like that? That’s less than half of what Proctor and Gamble is going to spend advertising its products in one year. It is approximately what Americans will spend on yogurt this year. This is a rich country, and the fact that we spend so little trying to influence the selection of those who will make and administer the laws is the amazing thing. Second! Surely we’re learning as we repeatedly do every two years the declining marginal utility of the last political dollar. There’s just so much you can do in throwing stuff on television.

Nor do the country’s voters care about transparency or process, argues Will.

I’m not convinced this will be true in the long run if corporations start fully funding campaigns, but the idea there is only so much that money can buy you appears to be proving out. From Politico today:

The trio of Meg Whitman in California, Rick Scott in Florida and Linda McMahon in Connecticut together have burned through more money than the U.S. Chamber of Commerce, American Crossroads and the American Federation of State, County and Municipal Employees have pledged to spend — combined.

Even in midterm elections awash with money and packed with larger-than-life campaigns, the collective sum of $243 million is nothing short of astounding — especially since that’s just the money that came out of their own pockets.

But here’s the punch line: None of these candidates is ahead in the polls. Two of them — Whitman and McMahon — are actually behind.

Watch the clip below. And fear not, there will be plenty of stories come November 3 regarding how much of a role money did or didn’t play in this election cycle.