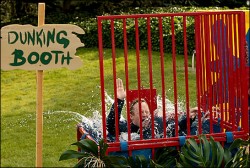 White House Press Secretary Robert Gibbs seems like a nice enough guy. He has a sense of humor about his work, he maintains a friendly banter with reporters, and he was even the goalie of the North Carolina State Wolfpack soccer team.

But Gibbs largely gets a free pass from the media for his many blunders. Just this past week, his attempts to brush off Sarah Palin’s comments on health care backfired, and he gave Iranian election protesters a major slap in the face when he referred to Ahmadinejad as “the elected leader” of Iran. Both times, there was a bit of hubbub that quickly blew over.

How does he do it? Maybe Gibbs is the Alessandra Stanley of the Obama Administration; he could just be skating by on his personal charm. A more sinister theory is that members of the White House Press Corps are afraid that if they criticize him, he’ll cut off their coveted access, a la Ari Fleischer under Bush. In comparison to Bush’s press secretaries, Gibbs has made a good impression overall. But has he earned it? Decide after you read these:

Sarah Palin’s Facebook note about “death panels” managed to sidetrack the health care debate for a good two or three days, which no doubt frustrated Gibbs and the White House. But Gibbs’ snark yesterday about how “you [reporters] cover a lot of process and you cover a lot of — you cover noise and heat and light” was the wrong kind of dismissal, and did nothing to brush the matter away. As Kansas City Star columnist Yael T. Abouhalkah put it:

Sorry, but when the former vice presidential candidate of the Republican Party says something that quickly enters the national debate over health care — no matter how ridiculous it might be factually — it’s worth talking about, if only to discredit it.

Gibbs put his foot in his mouth on August 4th when a reporter asked if Ahmadinejad was “the legitimate president of Iran” and Gibbs responded that he was “the elected leader.” Gibbs’s intent seems to have been to artfully delegitimize Ahmadinejad, but he inadvertently made it sound as though the White House recognized the disputed results of the Iranian election. Gibbs eventually backtracked, saying, “whether any election was fair, obviously the Iranian people still have questions about that and we’ll let them decide that. But I would simply say he’s been inaugurated and we know that is simply a fact.”

Gibbs has a habit of joking and laughing away tough questions. When Politico‘s Patrick Gavin looked into the matter in May, he found more than 600 instances of “(Laughter.)” from both Gibbs’ and the Press Corps’ end in press briefing transcripts — more than ten each day. Sometimes, this falls into the “charm” category, but when Gibbs does things like laugh at the size of the national deficit, as he did in April, he comes across as tone-deaf.

On March 16th, Gibbs briefly channeled the HuffPo comments section when he responded to Dick Cheney’s remarks that the U.S. was less safe under Obama than it had been under Bush by quipping, “I guess Rush Limbaugh was busy … so they trotted out the next most popular member of the Republican cabal.” When you’re the White House Press Secretary, show a little respect for the former Vice President, even if you disagree with him.

5. What Joe Biden “Meant to Say” About Swine Flu

If protecting the White House from the press is like being a minesweeper, then protecting Joe Biden is like being that crazy guy from The Hurt Locker; there are just too many gaffes to defuse. That said: on April 30th,  Gibbs attempted to spin Biden’s infamous “closed container” remarks on swine flu into a handy health advisory. Jake Tapper called him out for not saying anything “remotely close to what [Biden] said.” Gibbs’s response? “I understand what he said, and I’m telling you what he meant to say.”

When a reporter asked if Obama’s remarks during Gates-Gate would lead to a backlash among police groups, Gibbs responded, “I think the Fraternal Order of Police endorsed McCain, if I’m not mistaken.” It quickly shot to the front page of Drudge. No doubt Gibbs had prepped the response, but it came out at the wrong time in the wrong way, and made Obama’s response to the situation seem vengeful.

7. Monarchy in the UK

Gibbs unwittingly kicked a hornet’s nest in June when he told reporters that the Obama administration was working to get the Queen to attend D-Day commemorations in Normandy. As Swampland noted,

Buckingham Palace protocol demands that Her Maj receives a formal invitation before traveling to a foreign country. Gordon Brown has insisted that if the Queen wishes to attend, he’ll sort her out an invitation. Gibbs’s intervention seemed to suggest that the Prime Minister was too impotent to deliver on his promise without White House help.

As it turns out, the White House hadn’t even been in contact with Buckingham Palace; Gibbs was winging it. The Queen did not end up going to the commemorations; Prince Charles attended and represented Britain at the D-Day commemoration ceremonies.

This post has been corrected and updated since publication.