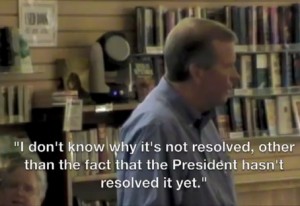 Republican Congressional candidate Tim Walberg (not the unsung “Sixth New Kid on the Block”) has joined the ranks of mainstream GOP figures to make a play for the all-important “Birther vote.” He recently told a group of voters at a coffee shop that, while he “take(s) him at his word that he’s an American citizen,” he’s got a plan for Obama to put the whole thing to rest: a private birth certificate viewing party.

The most entertaining part of the clip, though, is the Council of Elders that Walberg puts together to bear witness to the grand event. (h/t Think Progress via Alan Colmes)


Transcript: (via Alan Colmes, emphasis his)

WALBERG: Well I’m going to take him at his word that he’s an American citizen. I don’t know why it’s not resolved, other than the fact that the president hasn’t resolved it yet. […] If I had to do it I’d just simply of course I had to show my birth certificiate to be on the ballot. If I were gonna do it I’d call Rush Limbaugh, Alan Colmes, Nancy Pelosi, Mitch McConnell, and maybe one justice of the US Supreme court. Call ‘em all into a room and lay out my birth certificate on a table…and say all of you take a look at it show me what you find. Now go and report it. […] The Executive has an awful lot of power to keep from showing certain things unless the courts will stand up to him. Or unless Congress in majority will stand up, up to and including impeachment. And Republicans don’t have that majority.

Now, Alan Colmes is a great guy, a great liberal, but I’m sure even he would admit that he and Rush Limbaugh might not possess the gravitas to serve on a panel with a Supreme Court justice. Luckily for them, in Walberg’s plan, SCOTUS participation is optional.

In any case, Alan doesn’t seem to be available. Might I suggest replacing him with Christine O’Donnell and a Ouija board? And how do you not invite Cousin Sarah?

Taken in isolation, this is no big deal, but Walberg is part of a Funky Bunch of GOP candidates that include a recovering eye-of-newt-aholic, a homophobic bestiality aficionado, a Nazi reenactor, and a “Second Amendment remediator.” With a scant few weeks to go until the midterms, Walberg has little chance to catch incumbent opponent Mark Schauer (D-Mi), but he and his fellows might give voters second thoughts about putting this political Addams Family in charge.