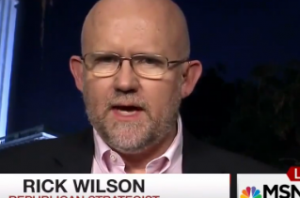 There isn’t much of a filter on Wilson, basically.

In a segment called “Trumpster Fire,” Hayes asked Wilson about the motivation any Republican lawmaker would have to stand with Trump. Wilson said, simply, that eventually, members of the GOP will see that Trump “is not 20 feet tall” and that they are more than able to turn their backs on him this election season.

How he said it, though, is perhaps the most interesting part.

“That’ll give [Republicans] some cover to do the right thing,” he said of Clinton’s eventual climb in the polls. “in the venal, shitty — oops, sorry — political way that they behave in a lot of cases.”

Hayes was heard laughing a little when Wilson was speaking, but followed up the consultant’s little speech with, “Apologies for that language.”

“It was fine,” said Hayes. “Well, it was not fine; it was honest, though. It was an accurate characterization of the way politicians often behave.”