Haiti Crisis Brings A Reluctant George Bush Back Into The Spotlight 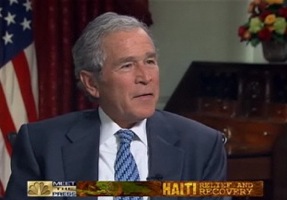 Its almost been exactly a year since George W. Bush left the White House – a place he called “home” for eight full years. But recent events in Haiti appear to have transcended the once and future bipartisan landscape, bringing back the former president from his relative secluded and quiet, post-presidential life. Yesterday Bush was a guest on Meet the Press with Bill Clinton, and he candidly shared his feelings towards being back in the spotlight.

The television appearance for President Bush only happened under strict conditions that topics never veered off of humanitarian aid in Haiti. Writing for the NY Times, Peter Baker reports:

But Mr. Bush resolutely stuck to his vow to stay out of the political debates consuming Washington. He held his tongue, as he has for a year, even as President Obama has deflected criticism by pointing to the troubles he inherited and while many from Mr. Bush’s old team, led by former Vice President Dick Cheney, waged a vigorous campaign against the current president.

The Sunday interviews were organized on the condition that they stuck to Haiti, an adviser said. “Now’s not the time to focus on politics,” Mr. Bush said on “Face the Nation” on CBS. “It’s time to focus on helping people.”

If anything, he seemed reluctant to be back. “I frankly don’t miss the limelight,” he said on “State of the Union” on CNN. “I’m glad to help out, but there’s life after the presidency, is what I’ve learned, and I’m going to live it to the fullest. And this is part of living it to the fullest, to help other people.”