How Could Mitt Romney Sit In That Church For 31 Years?
video

How Could Mitt Romney Sit In That Church For 31 Years? 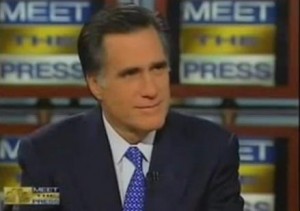 Probable GOP presidential nominee Mitt Romney had a few uncomfortable questions fired at him at a Wisconsin town hall meeting Monday, referencing Mormonism’s racially exclusive past. On Monday night’s The Last Word, host Lawrence O’Donnell argued that “the politics of religion has spared Mitt Romney the embarrassment of having to address this issue.

While he’s right that the press has given Romney a pass on Mormonism’s racist near-past, and will continue to do so, that covenant was notably absent in 2008, when the candidate was Barack Obama, and the religion was Black Liberation Theology.

The questioner at that town hall began by referencing a Mormon scripture that references the Curse of Ham, which, along with the Curse of Cain, was the basis for the LDS policy against black men in the priesthood, and for Brigham Young‘s injunction against interracial coupling. Romney cut him off, saying he wasn’t about to discuss religion, so the questioner asked, “…do you believe it’s a sin for a white man to marry and procreate with a black?”

Romney curtly replied, “No, next question.”

The Church of Jesus Christ of Latter Day Saints ended its policy barring black men from their priesthood in 1978. Let that sink in for a moment. 1978. In his “Rewrite” segment, O’Donnell compares that date to other Civil Rights touchstones, particularly the 1968 assassination of Dr. Martin Luther King. To put it in cultural terms, the same month the church changed its policy, The Son of Sam was sentenced, and the first Garfield comic strip was published. In 1978, Mitt Romney was 31 years old. O’Donnell rightly wonders when some member of the press will have the courage to ask Mitt Romney what he believed about black people when he was 30 years old:

Where O’Donnell and Romney’s town hall questioner go slightly wrong is in attacking Mormon beliefs, because the sneering mainstream critique of Mormon doctrines seem only to be a matter of dates. Mormon prophecies, the reasoning goes, are “crazy” because they were made a few hundred years too late. Indeed, on the very subject of black people and the cursed descendants of Ham and Cain (which sounds like a delicious cold-cut recipe), Christians once used the same basis to justify slavery. A doctrinal belief can be winked at, dismissed, diminished, outweighed.

The policy, however, cannot, and is not innoculated against scrutiny in the same way that a belief is. Mitt Romney can claim he never believed in the Curse of Cain, but he still sat in that church for 31 years while black men were denied the right to be priests.

As it turns out, someone did ask Romney about the policy, in 2008. On Meet The Press, the late Tim Russert pressed Gov. Romney on the church’s policy, and while Romney said he was not going to distance himself from his church, he said he was “anxious” for the policy to change, and “wept” when he heard about it. He also refused to say that his church was wrong to have excluded black men from the priesthood:

The question remains: how could Mitt Romney sit in that church for 31 years?

If that question sounds oddly familiar, it’s because then-Sen. Barack Obama was held to an entirely different standard in 2008, and even today. Because of a few statements by one man at his church, statements he says he never even heard, the press jumped all over him, and conservatives still bleat the refrain “How could he sit in that church for 20 years?” (I’ve always loved the visual there, as if he was holed up in an Occupy tent while people brought him provisions.)

I’m speaking, of course, about Rev. Jeremiah Wright, whose fits of vehement criticism of America nearly derailed Barack Obama’s run for president, and precipitated Obama’s famous speech on race. It also touched off endless media examinations of Black Liberation Theology, which was curiously unprotected by O’Donnell’s “politics of religion.”

One man, two excerpts from sermons that Barack Obama wasn’t even at, and no only was it “game on,” it was the damn Super Bowl.

So why does Mitt Romney get a pass for sitting in a church whose policy it was to exclude black men from its priesthood? O’Donnell is partially right, the press is reticent to alienate huge swaths of people who would object to a perceived attack on (almost) any religion. Rick Santorum has largely gotten a pass for his denial and mitigation of Catholic child rape scandals that reach all the way to the Pope. That, too, was not an issue of religious doctrine, but of church policy, yet the press shies away because there is even a whiff of an attack on religion.

But none of them were worried about alienating adherents of Black Liberation Theology, and none were the least bit hesitant to attached the perceived sins of Rev. Wright to a man who repeatedly denounced them, and (again) wasn’t there when they were committed.

In this case, Romney is benefiting from a combination of that deference to religion, and one of the more self-serving aspects of white privilege, cultural self-forgiveness. It’s the time-honored way in which America white-washes over the shortcomings of the past by saying things like “Well, it was the time.” It’s how we view the racist depictions from old cartoons, or the casual degradations in the average episode of Mad Men with an almost quaint, nostalgic sense. If Mitt Romney has to answer for what his church did until 1978, what do the rest of us have to answer for? What did we sit through silently?

Even by that standard, though, 1978 is a little too recent to get the “those were the times” pass, and 31 is a little too old to get the “What could he do?” pass. He could have gotten up and walked out of that church at any point during those 31 years (or, say, 29 of them), but he chose not to. Someone should ask him why.