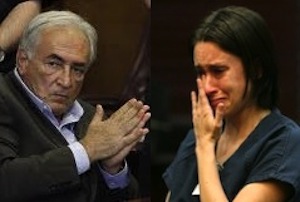 When the Dominique Strauss-Kahn scandal broke in May, many reporters tried to bring the story home for Americans by comparing it to Arnold Schwarzenegger‘s revelation that he’d fathered a love child. With DSK back in the news this week after new reports that he may be innocent after all, pundits are again drawing parallels to another case being discussed, that of Casey Anthony. “Combined with the seeming collapse of the Dominique Strauss-Kahn case, the shock showed a press quick to jump to conclusions, if not about actual guilt, then at least about guilty verdicts,” TIME‘s James Poniewozik said, upon the conclusion of the Anthony trial this week. What do these two stories really have in common with each other?

Wrong first impressions: “Both are unsympathetic defendants, both have been targets of the kind of rush to judgment so common in sensational cases, and both, surprisingly, are going to escape severe punishment, says a USA Today editorial. We judge people wrong sometimes. “Public perceptions should be irrelevant. It remains better to let guilty people go free than to convict one person who is innocent.”

It’s not the public’s fault: “The most important part of criminal law,” says Jeffrey Toobin at CNN, is “the concept of prosecutorial discretion, and it is at the heart of our justice system — as the pursuers of Casey Anthony and Dominique Strauss-Kahn have discovered.” In both cases, “mistakes by prosecutors — overcharging in the Anthony case, rushing to judgment in Strauss-Kahn — were apparent even at the time. Prosecutorial misjudgments can deprive the victims of crime, and society at large, of the punishment and incarceration of those who broke the law.”

Proof the legal system works:  “In high-profile trials as well as in trials the public never hears about – and that’s the majority of them – the jury’s job is never to prejudge The court of public opinion, in contrast, almost always prejudges,” says Jac Wilder VerSteeg in The Palm Beach Post. “So verdicts will shock from time to time. Agree with these outcomes or not, it is a good thing that our legal system still can overrule the court of public opinion.” Paul Campos at The New Republic agrees: “The unsatisfactory nature of these outcomes is the price we are supposed to be willing to pay to avoid travesties.”

It’s our narcissism at work: Reality TV and social media are fueled by “people who have an inflated sense of their own importance.” Now the news is following: Both Strauss-Kahn and Anthony have been described this way. “We all know and are drawn to narcissists — at least at first, until their dark side emerges. And, psychologists maintain, deep within we all have a healthy dose of narcissism in our blood, reports the Houston Chronicle.